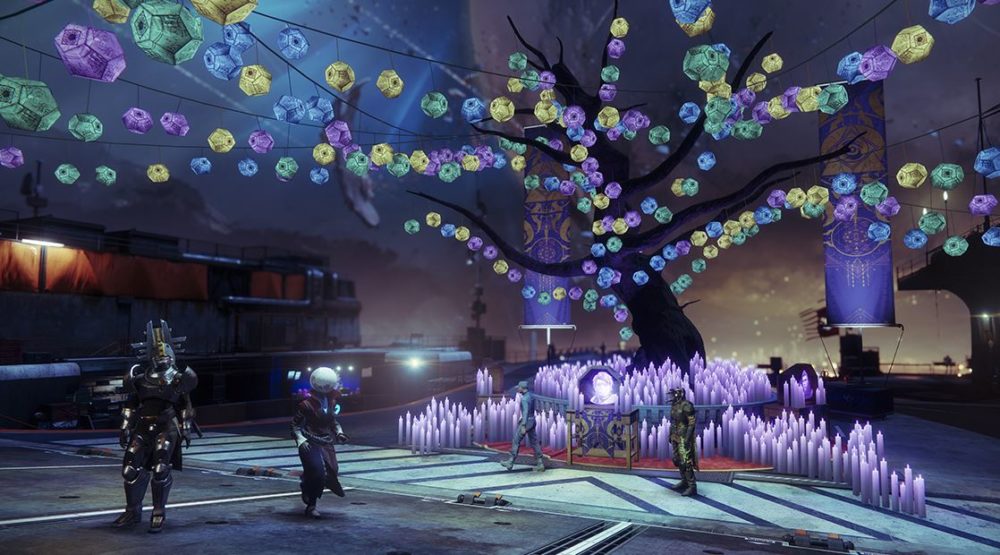 Today, Bungie released the plan for 2018’s version of Festival of the Lost, the first themed event since Forsaken launched last month. Destiny 1 holiday events were okay, but nothing that special. Destiny 2 found a way to make them worse in its first year.

Looking at the plans for Festival of the Lost, though, it looks like Bungie has finally put together a coherent holiday event that not only is not crap, but actually looks like a lot of fun. Not just by previous Destiny 2 standards, but just by like, normal standards that we’d hold anything else to.

The plans for Festival of the Lost are very Forsaken-like. Which, if that’s not clear by now, is a very good thing. Let’s run down the highlights.

First, there’s going to be an event exclusive item – the Horror Story legendary Auto Rifle – which can be obtained via special bounties that will be given out by Amanda Holiday. We can safely check off exclusive gear not tied to microtransactions and give Amanda Holiday something to do off of the list.

There appears to be a new exclusive area too with a brand new event called the Haunted Forest. It’s a 15-minute timed event where you’ll have to go as deep and far as you can with what seems like escalating difficulty the further in you go.

This looks kind of like it’s tied to the Infinite Fores as it looks vex-y? But we’re not 100% sure about that. It would be cool if the Infinite Forest served some other purpose, but either way the Haunted Forest event does sound really fun.

We’ll be able to compete with friends and the general public to see who can clear it out most efficiently, and hopefully there’s even more exclusive stuff or at least some good rewards from that as well. Oh and yes, there will be matchmaking for it, thank goodness.

There’s going to be a special quest line which will kick off on Oct. 30 and will reward powerful gear. The details on that are scarce, but it has something to do with avenging Master Ives.

Yes, there is of course going to be microtransaction and Eververse content this time around again. You’ll get a special Festival of the Lost themed bright engram with new stuff, in addition to your usual engram for filling up for XP bar. But with all the other content that is going on, and that the new engrams are in addition (not in replacement of) to the normal engrams, it’s a much easier pill to swallow this year.

Bungie has clearly put some more thought, and effort into their first post-Forsaken event this year. That kind of effort is going to need to persist through 2018 for Destiny 2, lest we have a repeat of the time period between The Taken King and Rise of Iron.

The Taken King, like Forsaken, was an incredible expansion. It changed the way we felt about Destiny, and launched the game into a new era where both Bungie and fans were happy with where the game was at, and most that were involved felt optimistic about the future.

However, the content in The Taken King could only be spread out for so long. There were no mini-expansions that year. So Bungie relied on events, like this, to carry the torch until September. It did not work very well and by the time we go to spring, Destiny was kind of played out, even if major problems were resolved through The Taken King.

Destiny 2: Forsaken, hopefully won’t face the same fate. There appears to be more substantial, gameplay-focused content via the Annual Pass sprinkled all throughout the year, and presumably, these events will fill the space between those releases. Take right now for example, there’s Festival of the Lost carrying fans through early November, and then roughly one month later, The Black Armory will be out.

It took a few years, but Bungie seems to really have a good feel for what kind of Destiny 2 content fans want to see from them, and are finally delivering not just sporadically, but consistently. I hope I’m right.