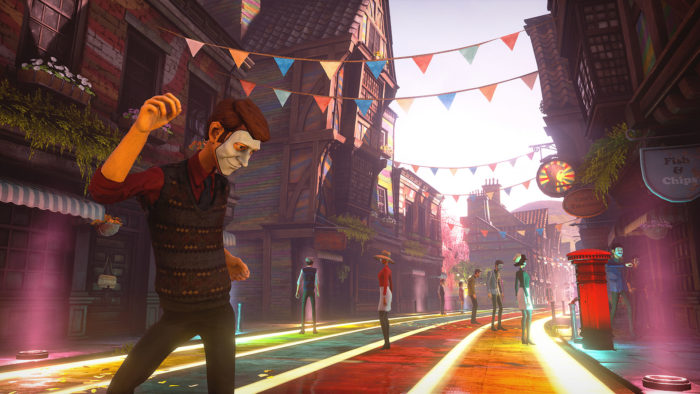 We Happy Few started life as a trippy, procedurally generated survival game full of drugs, mayhem, and dark, sinister secrets. While the game has evolved since its reveal, we don’t know the full extent of all the changes that have been made, but at least we now have a good grasp on the current state of the game thanks to a new trailer.

We’ve known for quite a while that players would be able to select from several characters in We Happy Few, including the archivist Arthur Hastings and the chemist Sally Boyle. Sadly, we don’t know if they are the only playable characters or if others will join them on their adventures through the drug-addled streets of Wellington Wells. But, the trailer gives audiences a good long look at three other characters: Doctor V., “mad” Ollie Starkey, and a man simply known as the General.

While Doctor V. is clearly meant to be a villain (judging by a blink-and-you’ll-miss-it moment where he electrocutes the player character), Ollie and the General could potentially be future unlockable playable charaters, or at the very least welcome allies. Lord knows you need as many as you can get as the game is full of citizens hopped up on mood-altering drugs that make them perpetually happy, especially when they’re smashing your face in with a frying pan.

And while we’re on the subject of characters, the trailer indicates they will be getting into more than just the original premise of “escape from Wellington Wells.” Apparently, the fictional drug Joy isn’t doing it’s job anymore; more and more citizens are remembering the horrible things they did in the past to win a particular battle. And, like any dystopian government, those in charge are desperate to find a new, permanent solution, one that involves a metal helmet and an electrical lobotomy. Odds are good one or more of the playable characters will become embroiled in these mad schemes, or worse, a guinea pig.

The trailer isn’t all about story, though, and it shows off how We Happy Few’s game mechanics have evolved since their initial inception. Crafting, for example, has changed from the basic survival standard of “mash a rock and a stick together to make a crude weapon” to something that wouldn’t be out of place in Dead Rising, as evidenced by the electro-hammer that looks like it was made out of a battery, nails, several lead pipes, and duct tape. And We Happy Few will also feature some distinctly RPG elements, including purchasable skills and fetch quests, but I wouldn’t be surprised if that’s just the tip of the iceberg when it comes to the changes that have been made to the game.

We Happy Few will release August 10th for the PC, Xbox One, and PlayStation 4.