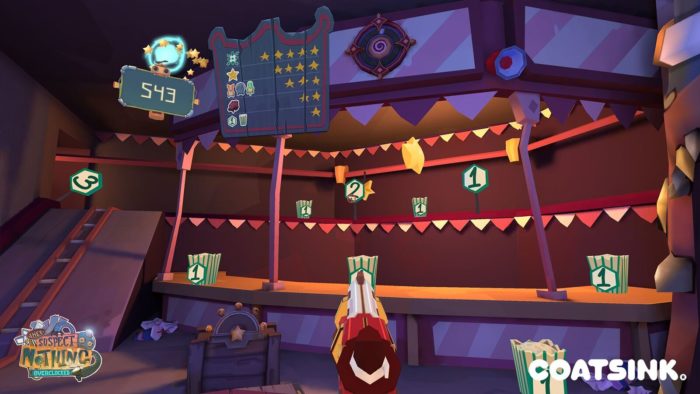 They Suspect Nothing, the comical Oculus Go launch title about fooling robots into believing you’re one of them, is set to release its ‘OVERCLOCKED’ DLC on August 3, entirely for free.

The acclaimed mini-game experience is set amid a world over-run by robotic AI, and you’re the last human on earth. The robots, cunning as they are, have devised a test to root out the last pathetic pile of flesh and bones. The interrogation process, a sort of reverse Turing test, tasks players with completing a series of mini-games with clinical accuracy to prove you’re not the feeble human they suspect you are. The new OVERCLOCKED DLC adds 8 new minigames to the base package, bringing the total to 20, with all-new voice talent for over twenty additional characters.

Richard Snowdon, Senior Producer for They Suspect Nothing said the following:

“The OVERCLOCKED DLC takes the player into the heart of the robot society of Arcadia, while introducing a wealth of new jokes, characters and secrets.

“To house these 8 new minigames, 2 unique hubs were created: Arcadia City University, which sees you cheating through finals with the help of an enthusiastic insider; and Terminal Park, a vibrant theme park run by an extravagant fortune teller and her jaded crystal ball.

“The team at Coatsink were delighted for the opportunity to create more content for They Suspect Nothing and can’t wait to find out what players think of OVERCLOCKED.”

The DLC will include:

Check out the trailer for They Suspect Nothing below:

They Suspect Nothing is available now for $7.99 on Oculus Go and Samsung Gear VR with the free ‘OVERCLOCKED’ DLC downloading to headsets on August 3.