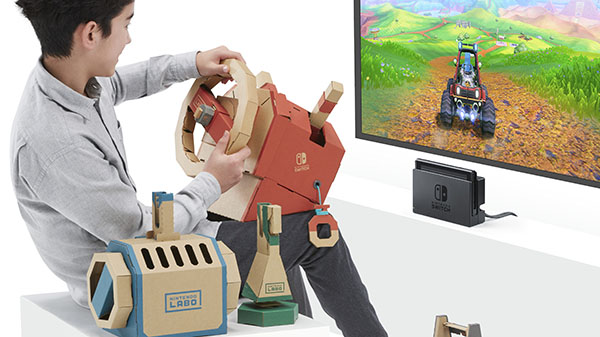 Nintendo’s collection of accessories for its cardboard building system with the Nintendo Labo is growing, and there’s a whole new set of toys coming to play with. This September, the Toy-Con 03 Vehicle Kit will let you create your own car, plane, and submarine, and a key to turn them on. While you’re not making the exact shapes of each vehicle, however, you’re going to be able to pilot and drive them.

You’ll build steering wheels, pedals, and joysticks to control your onscreen vehicles, which is a very cool move. Once built, you can link your creations to the Switch to take to the air, land, or sea in both one and two-player modes. The set will run $70 like the previous Labo Variety kit, and it looks to offer plenty of cool new ways to work in the cardboard medium.

This makes three kits that will be available for the Labo system: the Variety, Robot, and Vehicle kits, and that doesn’t include of course the ability to make your own custom items using Labo’s creation tools. There’s a ton of potential here, and tons of new ideas to build off of, so if you’re aching to get down to some more tinkering with the Labo, this looks like a great new chance to do it. See it all in action in the video below!