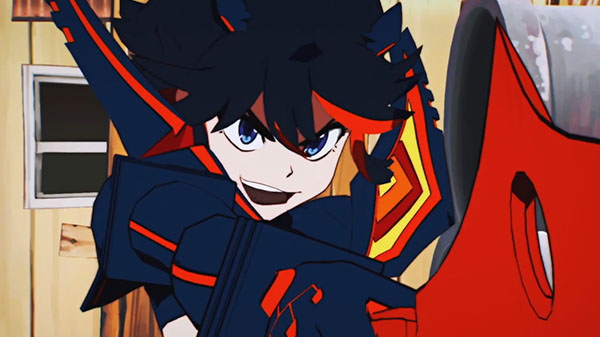 More surprising than getting a fighting game based on the world’s most popular anime featuring super powered apparel and scissor blades? That it took so long to become a reality. Arc System Works and Studio Trigger officially revealed the trailer for Kill la Kill The Game: IF at Anime Expo 2018. The game was first revealed back in June.

Being developed by APlus Games and distributed by Arc System Works, the new arena fighter effectively blurs the line between classic 2D animation and 3D models, just as Guilty Gear Xrd and Dragon Ball FighterZ did before it. Ryuko Matoi and Satsuki Kiryuin duke it out in the very brief trailer, but it does show some hints of the combo system we can expect. For instance, Satsuki launching Ryuko into a juggle combo with the camera panning to 2.5D plane. There also seems to be a sort of clash system in game, almost akin to the button mashing tests of Jojo’s Bizarre Adventure: All Star Battle.

Studio Trigger debuted Kill la Kill in 2013 to much praise. The anime followed Ryuko Matoi as she infiltrates Honnōji Academy looking for her father’s killer. Powered by Goku Uniforms, super powered student uniforms, many of the anime’s characters are provided many over the top abilities that probably should have inhabited a fighting game a long time ago.

Not much detail was revealed for the new game, but it is confirmed for a 2019 release on PlayStation 4 and Steam. For those in attendance at Evo 2018, Kill la Kill the Game: IF will be playable on the floor on Aug. 3-5 in Las Vegas.