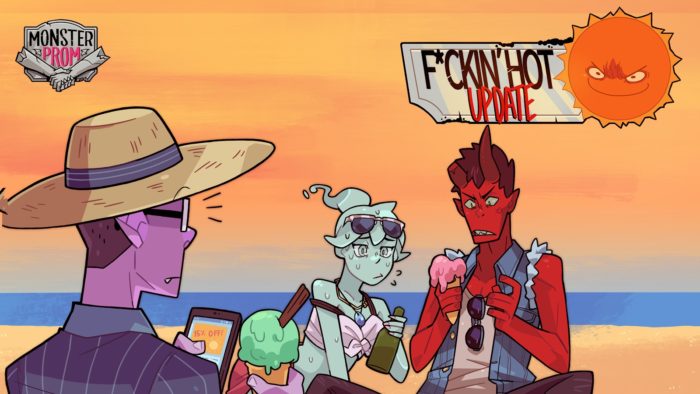 Monster Prom, the delightfully cheeky and irreverent dating sim from indie developer Beautiful Glitch, is receiving its first big free upgrade in the form of the F*ckin’ Hot update. Yes, that’s the official title, and yes, it is very appropriate for the subject matter.

After a cryptic clue dropped on the official Monster Prom Twitter account, speculation was rife as to what was in store for the students of Spooky High. Was this a new ending? A new costume? A Mario Bros. 3 reference? As it turns out, (almost) all of those things are true, as the F*ckin’ Hot DLC adds seasonal outfits for your favorite characters, a brand new secret ending focused on the demon hottie Damien, and other bonuses including a photo gallery, Steam trading cards, and a few graphical modifications to various locations.

In addition to the fact that this update is dropping free of charge, Monster Prom will also be getting a 15% discount on Steam, meaning that even new players won’t have to break the bank in pursuit of sultry ghoulish romance.

Keen on learning more about Monster Prom? Don’t forget to check out the Twinfinite review! Sound off on the comments below with your take on the new DLC, and feel free to discuss your keen tactics on seduction (we only ask because we get rejected frequently and it’s starting to affect our self-esteem).