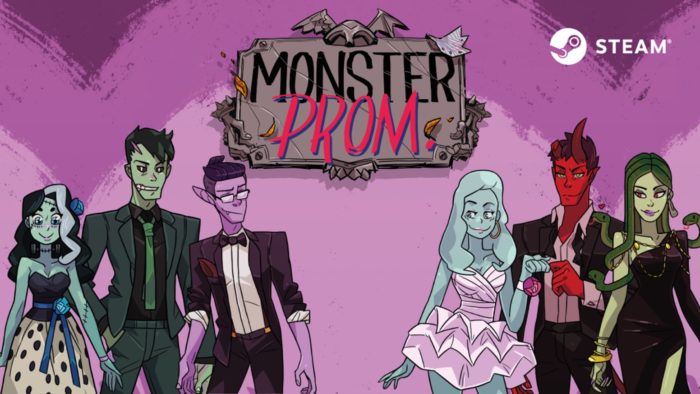 We live in an era where dating simulators are plentiful, multifaceted and, oftentimes, bizarre. Whether you’re courting a selection of eligible fathers looking for love, handsome warlords from a bygone dynasty, or an actual horse, there’s truly something for everyone, and it can be hard for any one entry to stick out from the crowd.

In the case of Monster Prom from Spanish indie developer Beautiful Glitch, the major quirks are thus: you are trying to find a monster to take to the prom, which is a good start, and it can be played by up to four people at the one time – and that is where it really makes its mark.

You play the role of a student at Spooky High School. The prom is only a few weeks away, but you are still without a date, and have your eyes set on one of six potential candidates for your affection. Your goal is to woo them before it is too late, applying whatever charms you think would be most likely to catch their fancy. By answering a series of trivia questions at the beginning, your character is assigned personality statistics that measure their boldness, creativity, intelligence and more – knowing which would be best suited to your desired love interest can prove crucial to your success.

Throughout the day, you choose which of the school buildings to venture into, which will lead to discussions with the dateable monsters, as well as a few other binary characters as well. Depending on how you respond to each situation, your statistics will be adjusted accordingly. Though you can usually cater your answers dependent on the monster you are hoping to land, strictly following that rule to the letter can backfire on occasion, as some choices will lead to reductions in stats. It can seem random at times, and you may feel punished for reasons beyond your control, but the quality of the writing makes even these setbacks enjoyable. More on that in a bit.

To help give structure to the proceedings, there is a pop-up store run by a disinterested cat creature that will frequently appear on the map. If you have the money, stopping by her store can boost your chances of success, or even trigger specific events that are otherwise unavailable – though it will come at the cost of an opportunity to increase your stats. In addition, you will visit the cafeteria each day, which gives you a visual cue of who is sitting at each table. Trying to seduce Liam? Sit down next to him, and say something smug. He’ll probably like that.

The most immediate thing that jumps out at you from the outset is that this game has a sense of style which is downright infectious. The art style is quirky, the character designs bursting with life, and the soundtrack, riddled with guitar twangs that evoke memories of 60s surf culture, serves as a surprisingly suitable undercurrent to the proceedings. You can choose how long you would like your gameplay session to last – the short option averages out at 30 minutes for a single player, while the longer one should take about an hour. There’s no substantial difference to the options; picking the longer one simply gives you more in-game days to pursue your monster date. With four players, the estimated length is two hours – though with more people surrounding the computer, you’re less likely to be thoroughly reading all of the text and meticulously mulling over your decisions.

On that note, the ways in which multiplayer gameplay have been catered to are creative and amusing. Whoever has the first turn gets to freely select whichever room they want to enter or which table to sit at during the cafeteria rounds. This leaves the last person with fewer options, so it is always desirable to be first. After each round, a question is asked about a theoretical scenario, and the players get to decide which answer is best, thereby dictating the order that the players will go in next. It’s a fun twist that puts the onus on the people, not only allowing them to enjoy the game, but also to have some absurd debates among one another. Theoretically, if you have noticed one of the other players muscling in on your desired monster, you could simply vote against their answer every time, so if you can’t play nice, you can simply let the game choose your order randomly.

Once you have reached the end of the final week, you will have to muster up the courage to ask a monster out to the prom with you. Depending on your decisions throughout the game, they will either agree to join you, or reject you outright, leaving you in abject misery. Then, the credits roll, and it’s all over. You can unlock new items that will add additional decisions to your repertoire for the next session, and begin afresh. In this way, the game strays from the typical dating sim formula: you’re not trying to build a relationship here, there will be no hand holding or face petting afterwards. You either win, or you lose, and then you start it all over again.

In that sense, Monster Prom may be more appealing to those after a party game, rather than a traditional dating sim. You aren’t meant to love these characters, and won’t grow emotionally attached to them. They’re all just a bunch of fun, wittily written skeins meant to serve a simple purpose. Which is a shame, because they are all immensely likeable.

Each of the characters simply ooze charisma, and watching them bounce off one another is a delight. As your intentions towards one particular monster becomes clearer, the game intuitively makes it more likely that they will cross your path whenever you choose a room. A little disappointingly, the rooms themselves will always have the one premise assigned to it: hanging around outside results in a rave, while there is a perpetual dodgeball match taking place in the auditorium. There will be minor changes in the details here and there, but a bit more variety in the activities would have been appreciated.

About the only major issue of Monster Prom is that the nature of its design can make it a double edged sword. As it is meant as a quick fire game that can be played for an hour or so at a time, there is a level of repetition to it: choose a room, have a discussion, choose a seat at the cafeteria, have a discussion. There are weekend events where you can help or hinder other players, but they are based on the same concept of making a single decision. And more often than not, you’ll probably just choose the one that most suits your desired monster, potential misfires be damned.

Should you play it long enough, you may end up repeating scenarios you had in the last session, particularly if you are trying to pursue the same ghoul a second time. Not only does this decrease the challenge of trying to make the best decision, but it robs you of experiencing new dialogue – it cannot be emphasized enough how enjoyable the writing is, with its satirical and cynical views, and frequent crudeness. This isn’t to say that there isn’t a generous amount of content (388 unique events, according to the progress screen), but it’s simply the nature of the beast that one full-length multiplayer session can gobble up a tenth of what’s on offer.

Ultimately, such foibles ought to be expected for a game that is not intended for drawn out marathoning. You are meant to pick up Monster Prom, take a crack at a new target, try out some new decisions or events, and then leave. The writing may make sticking around longer enticing, but it dries up the well – and what is there is absolutely marvelous, and worth preserving. For this reason, it fares a bit better as a multiplayer game than a single-player one, a standalone entry in a genre that is not known for catering to that demographic. For the lone Casanova, it is still most certainly worth giving a go, so long as you’re aware of its limitations going in.