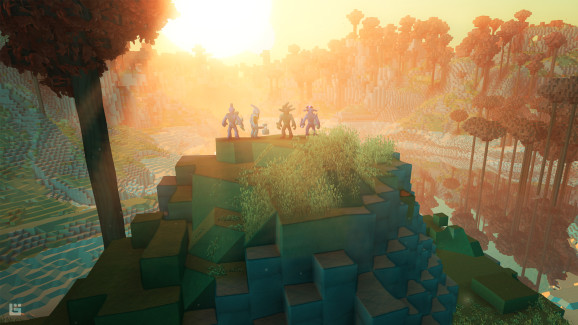 Square Enix Collective, the indie publishing label within Square Enix, announced today that they will be publishing the PC version of Boundless, an open-ended sci-fi MMO developed by Wonderstruck Games, which drops players into a fictional galaxy and sets them loose to do pretty much whatever they want. Boundless offers up very little in the way of traditional MMO structure, skewing fundamental elements such as quests, for a community driven and cooperative experience.

GamesBeat originally reported on the story and spoke to Square Enix Collective director of indie publishing Phil Elliott about their decision to take on the publishing project. What got Elliott excited about the game is how it’s entirely driven by players. “There [are] no NPCs, no developer-built structures, no ways to buy or sell things to non-player characters,” said Elliott to GamesBeat.

Indeed, as the GamesBeat article points out, Boundless is essentially a sandbox for players to create their own stories. There’s some lore for context, but that’s pretty much it. Players develop their own structures, cities, and will be left to find their own purpose in-game. Very little other than the tools to do just that will be provided by the developers, which is by design.

Boundless is currently in early access. There will eventually be a world wipe the restarts the game world before the game is fully released, so keep that in mind before jumping in and getting attached to your creations. There isn’t yet a confirmed date for full release for eithe rPC or PlayStation 4.