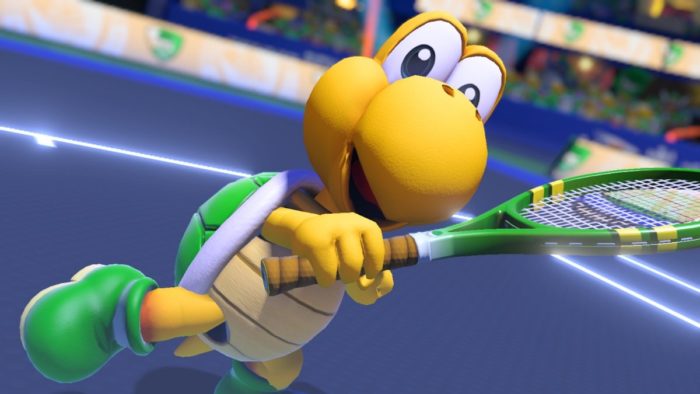 The wait is finally over for turtle fans the world over, as Koopa Troopa has been added today to the Mario Tennis Aces roster. The first of a series of characters made available via online tournament play, Koopa Troopa boasts fantastic speed and a tenacious attitude. Plus he’s just so darned cute, and that’s a definite plus.

Much like the alternate Mario outfit in the pre-launch tourney, all it takes is participation in order to unlock Koopa Troopa – so don’t stress if you still haven’t quite gotten the hang of Mario Tennis Aces’ mechanics just yet.

More characters have been confirmed to be arriving via this method, with Blooper up next in August, and Paratroopa, Birdo and Diddy Kong to follow down the track. Fortunately, those unwilling or unable to jump online need not worry about missing out, as these bonus players are only timed exclusives, and will be made available to everyone else the following month.

Since his curious inclusion in the original Super Mario Kart lineup, rubbing elbows with a cast of all-stars who had been major players in the Mario franchise, the humble Koopa Troopa has garnered something of a cult following, which makes his return to the tennis court a most welcome sight. Mario Tennis Aces released worldwide on the Switch on June 22nd, the latest in a series of sporting ventures from Nintendo and Camelot.