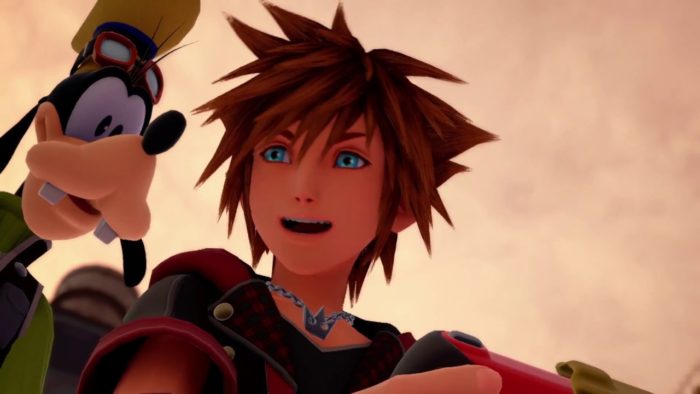 Kingdom Hearts has long been associated with PlayStation Consoles and Nintendo handhelds. Now, at long last it comes to the Xbox One, and we’ve got quite a trailer to celebrate.

The video starts off strong with the reveal of a level based on the movie Frozen as Sora, quite hilariously, realizes he isn’t isn’t dressed for a snowy locale. But that isn’t going to stop him from saving Elsa from the Heartless.

According to the trailer, the Heartless aren’t enemies Sora will have to face in Kingdom Hearts III. Not only is Organization XIII back (did it ever really leave, though), but so is Aqua, one of the protagonists from Kingdom Hearts: Birth by Sleep. However, Aqua doesn’t seem to be herself, as she has yellow eyes, which means she might be possessed. But by who?

Of course, enemies aren’t the only faces set to return in Kingdom Hearts III. The gummy ships are are coming back in all their space-shooting glory, as will King Mickey, Hercules, Simba, and several others famous faces. Oh, and ex-Organization XIII member Roxas. But enough about who’s coming back; let’s get onto what’s new.

We already know that Sora’s Keyblades will be able to transform in Kingdom Hearts 3. The Monsters Inc. one will turn into yo-yos, and the Toy Story keyblade will transform into a giant rocket hammer, but what about the inevitable Frozen keyblade? Apparently it will give Sora a pair of literal ice skates. As in they are made out of ice and can freeze opponents. Sora isn’t the only character who will get some new use out of his weapons, though, as Goofy will be able to slide down icy slopes on his shield Legend of Zelda: Breath of the Wild style.

Knowing Square Enix, Kingdom Hearts III has several metric tons more worth of secrets, features, and plot twists waiting in the wings, but we won’t know until the game releases January 29th, 2019 on the Xbox One and PlayStation 4.