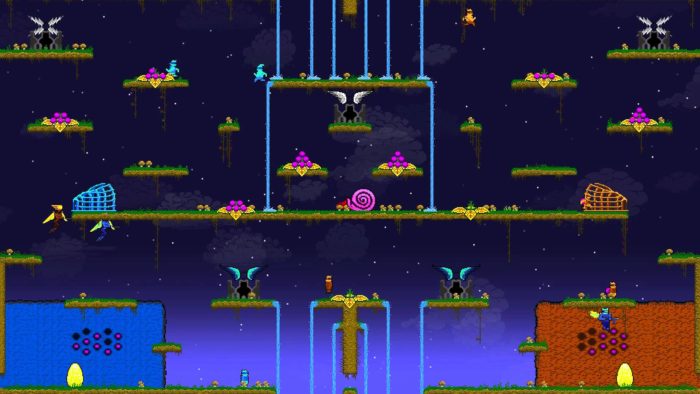 During the 2018 E3 Nintendo Direct, the company announced that the popular arcade game, Killer Queen, would be making its way to the Nintendo Switch as a console exclusive in the form of Killer Queen Black.

Killer Queen, which is a 10-player arcade game that took the world by storm over the past year, was something nearly nobody saw coming. How could they? It’s a one-of-a-kind arcade game. Well, now it’s on the Switch and it’s looking great. Dubbed Killer Queen Black, this game still allows for multiplayer action but instead of 10-players, it’s 8-players (and potentially less).

In Killer Queen Black, similar to Killer Queen, players will control one of 8 characters in a match of 4v4. On each team is a Queen player, who is controlled by the middle player (in the arcade version). Their goal is to stay alive, kick berries into the hive and take out enemy players. If the Queen is killed three times, the other team wins so it’s up to the other three players to help keep the Queen alive.

Those other three players are Drones, or flightless characters who spend their time either collecting berries to fill the hive (which is one way to win), or by riding the snail into their team’s net (which is another way to win). Drones are weak and prone to death, but it’s possible for drones to become Warriors. Warriors are able to fly and like the Queen, can kick berries loose berries into the hive. They can also kill enemy players, just like the Queen.

And this is just the simple basics of the game–it can grow to be far more intricate once speed gates, warrior gates and more are thrown into the mix.

It’s unknown how much the game will cost or what the release date is, but it was announced that the game is coming later this year.