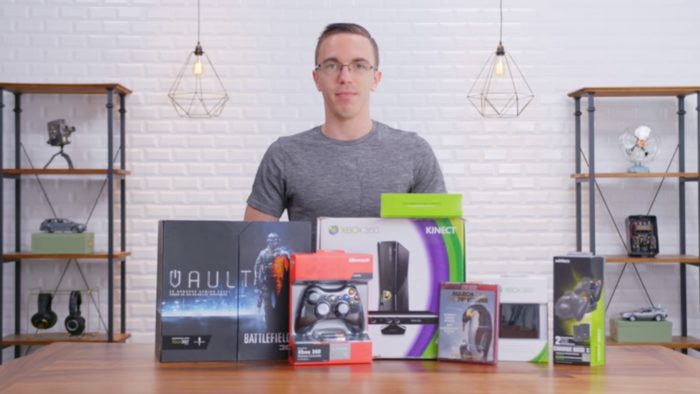 Gaming and tech specialist YouTuber Austin Evans has put together a video on how to assemble the Ultimate Xbox 360, and it’s both entertaining and educational.

The video more or less showcases every major accessory that was available for the Xbox 360, as well as few funny peripherals that are little more than time capsules of a different time, or failed experiments that were supposedly the future, but ended up going nowhere fast. He does the basic stuff, cleaning out a slim black model 360, and showing off the Kinect he managed to snag for $20 in a bargain bin (wave of the future everybody), and discusses several easy ways to increase the dismal 4GB internal memory of the cheaper model he was able to get his hands on.

Then Evans gets into the weirder and less successful add-ons for the system, and pulls out the Xbox 360 HD DVD player, which connects to the 360 by a micro-USB cable, and is meant to play movies in the ill-fated format of HD DVD’s, which was meant to serve as competition to the growing popularity of Blu-Ray’s, which the Xbox 360 could not play. Spoiler Alert: they never went anywhere and also his player doesn’t work. There are a few other basic accessories he shows off, but it never really gets as impractical or silly as the HD DVD player after that.

Oh wait no I lied, it does! Because at the end of all this plastic unboxing and compressed air dusting, Evans breaks out the Xbox 360 Vault. The Vault was a massive external case meant to decorate (and I guess protect?) your Xbox 360, all gussied up with Battlefield 3 branding and playtime military paraphernalia, complete with fake gas grenade.

By the end of it, Austin Evans has put together a serious hulking monster of an Xbox 360, with a quite a few helpful add-ons, but it’s far from “ultimate”. If you’d like to watch the whole video you can see it down below, and to see other videos he has done like it, you can visit his YouTube channel by clicking here.