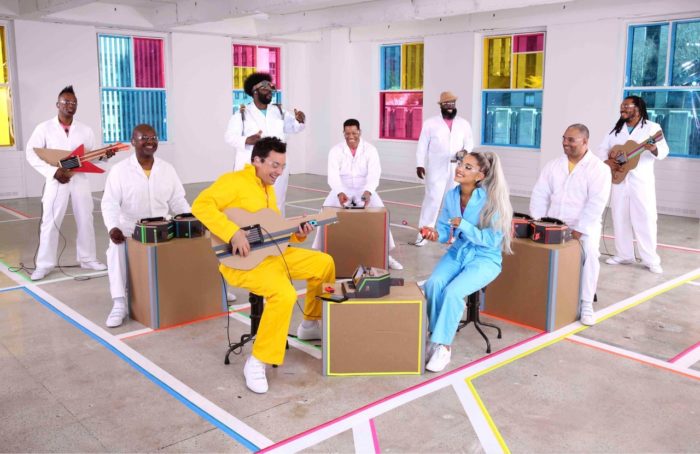 If you’re played around with Nintendo Labo, you know just how awesome and creative it is, especially when it’s opened up to creators to make their own toys with the materials included. One of the stars of the first kit’s show is, in fact, the Toy-Con Piano, and the Labo’s various “instrument” projects that you can use to create real music. The Tonight Show’s Jimmy Fallon and The Roots joined forces with pop superstar Ariana Grande to put together one of the coolest Labo-related things we’ve seen just yet, as Fallon, Grande, and The Roots perform a rendition of “No Tears Left to Cry.”

The cardboard band finds Ariana crooning along to her new smash hit single with Fallon and The Roots, all manning Labo instrument creations. Each member of the band put together their own instruments, as Fallon divulged to IGN. “We met with Nintendo and they showed us a bunch of cool cardboard things that you can make. We used the Variety Kit and we made a keyboard. We asked if we could make other cardboard things like guitars and they [Nintendo] said, ‘Of course! We’ll help you do it,'” he said.

Fallon strummed the song’s chords to keep things on track, while Grande sang ad used a custom Labo Triangle. Tariq of The Roots used the Toy-Con Fishing Rod, and Kamal and James utilized two Toy-Con Pianos to play both higher octaves and the bass. Stro used two Joy-Cons for drum sounds, and finally Questlove used the Robot Kit to control the high-hat and kick drum, which makes for a totally unique musical experience that really drives home just how awesome Labo really is for these kinds of projects.