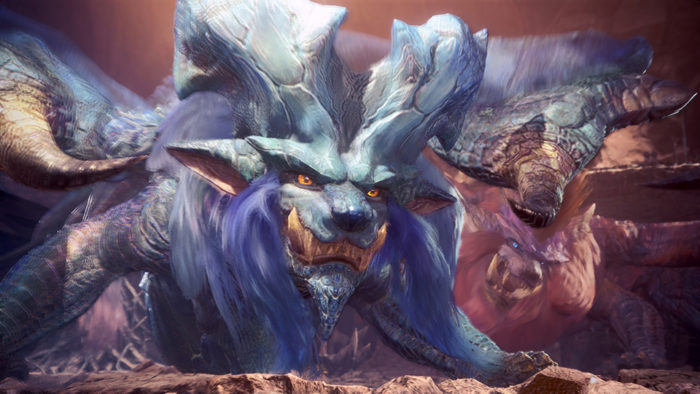 Sexual dimorphism is a fascinating subject in the world of biology. It’s what gives male lions their manes and makes them much larger than female lions. Sexual dimorphism is why female anglerfish are large and bulbous and males are little more than literal parasitic sperm banks. This ever-present biological constant gives game developers an opportunity to stretch their legs and create unique animals with extreme cases of sexual dimorphism, and one of the most famous examples, the Lunastra, is coming to Monster Hunter: World.

At first glance, the Lunastra looks like a blue Teostra, but that’s kinda the point since it’s part of the same species; Teostrasas are male and Lunastras are female. It’s kind of like cows and bulls. Or Rathians and Rathaloses (Rathali? Rathalos?). But, Lunastra has a few tricks up her sleeve to set her apart from her manticore-like mate.

Judging by the trailer, Lunastra will appear in the Elder’s Recess, just like the Teostra. She will be capable of self-immolation, but she can also set the ground aflame with blue fire. Not only is this fire dangerous to walk on, but Lunastra can make the fire explode for a damaging blast attack. Given the repertoire of attacks other monsters can use in Monster Hunter: World, the video likely provides only a small sampling of Lunastra’s capabilities.

While we don’t know everything the Lunastra can do, the trailer shows one thing gamers can expect her to not do: fight a Teostra. They are mates, after all. The trailer shows a Lunstra rescuing a Teostra from a Nergigante, which implies players might have to prepare for being dogpiled by multiple fire-breathing, lion-like Elder Dragons. But then again, that’s half the fun of Monster Hunter: World.

Of course, the Lunastra update will bring much more than just the monster herself. The patch will also feature brand new weapons and armor (that can be made with Lunastra parts), a mantle that allows players to automatically dodge powerful attacks, and numerous big fixes and quality of life improvements.

Lunastra will be patched into Monster Hunter: World tomorrow, May 31st. She will mark the third free content update to the game, the first being the Deviljho and the second including the Kulve Taroth.