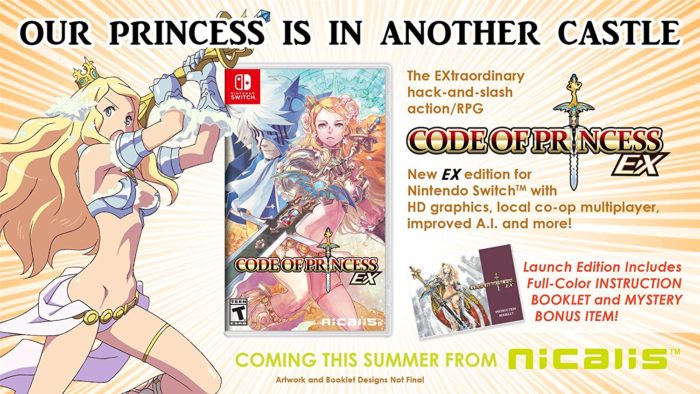 This news comes to us via a new trailer that Nicalis has published. Not only does the trailer reveal the release date, but it also shows off the remastered HD graphics in action. As well as graphical improvements, Code of Princess EX includes “local co-op multiplayer, improved A.I. and more.”

The game will be getting a physical release, and those who preorder the game will be treated to a special launch edition with some extra physical goodies. Along with the physical game cartridge, you will also get a a full-color instruction booklet and 3″ CD soundtrack sampler. The game can be preordered from Amazon for $39.99.

Not only will Solange and friends be heading to Switch as a part of Code of Princess EX, but they will also be appearing as characters in the crossover fighting game Blade Strangers. Solange, Ali, Liongate and Master T are set to appear alongside Shovel Knight, Isaac from Binding of Isaac, Gunvolt from Azure Striker Gunvolt, as well as characters from Cave Story and the Umihara Kawase series. On top of this, Solange will also be showing up in the crossover puzzle game Crystal Crisis.

Will you be picking up Code of Princess EX on Switch? Let us know in the comments.