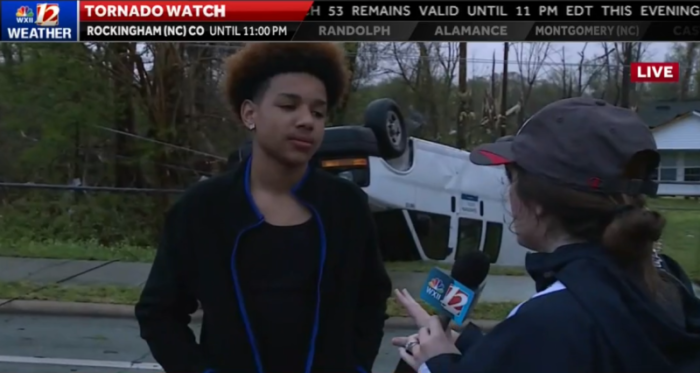 Just as some of us are having the beginning of a winter wonderland grace our homes today, last night the warmer temperatures caused a bit of a disaster for some unlucky North Carolina residents. It turns out, though, that one teen wasn’t really worried about the destructive winds outside his home that spawned a tornado. He was too busy inside playing Fortnite. Talk about dedication.

As the 135 mile-per-hour tornado descended upon Greensboro, North Carolina, a state of emergency was declared according to local news station WXII 12. Anton Williams was inside playing Fortnite when all this happened, and during an interview with WXII 12, he stated that he was busy playing online when the house behind his had been lifted off the foundation and his own house’s siding removed, even pierced by a power line. The reporter was curious as to what Anton was doing while all the madness was going on outside, and Anton was straightforward in his reply.

“I was sitting at home and I was playing Fortnite and all of a sudden I just heard a bunch of noise. I looked out the window and I started seeing the roofs come off the houses in front of me. Then I sat back down because I only had a couple of people left in my game. I was going to try to finish the game.”

He did take care to make sure his sister and nephew were in the bathroom as the storm got even worse to make sure they were safe. But even then, worried about the storm raging outside, he was “just thinking about the game.” Anton didn’t end up winning the match, but he definitely seems like the type of guy you want on your side in that kind of situation in-game. Looks like he’d have your back no matter what.