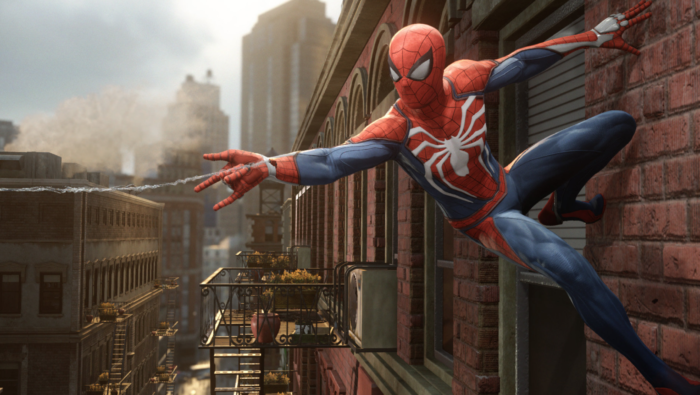 My games journalist sense is tingling! We have some important news regarding the upcoming Spider-Man game, and it looks spectacular.

Game Informer recently got some hands-on time with the upcoming Spider-Man game and its developers Insomniac Games. While the magazine received a taste of the web-swinging and combat, it also managed to experience some of the extra little goodies players can look forward to in the game.

Even though Peter Parker got his spider powers from a radioactive spider bite, many forget he is a technical-minded superhero and has an arsenal of non-lethal inventions to match his mutant abilities. The Spider-Man game will feature a plethora of spider-gadgets, which is to be expected given Insomniac’s experience with the Ratchet and Clank games.

Game Informer tested three gadgets that will be featured in the Spider-Man game: the tripwire, web bomb, and spider-drone. The tripwire can either string enemies up to walls or make them crash into each other (think the Remote Claw from Batman: Arkham Origins). Meanwhile, the web bomb is a crowd-control gadget that can cover enemies in immobilizing webs. Finally, the spider-drone is an attack drone that fires webs instead of bullets. Gamers can expect more spider-gadgets, all of them spider-themed and web-based.

Another large aspect of the Spider-Man game will be the suits. Yes, suits. Multiple. Plural. More than one. You know that suit that’s plastered all over the game’s marketing images? That’s the “Advanced suit,” and players can expect plenty of others. Each suit will come with its own special ability, such as dealing quadruple damage. During its time with the game, Game Informer saw four suits: the Advanced Suit, the “Classic suit” with the black spider symbol, and suits based on the Noir and Punk rocker multiverse Spider-Men. According to Intihar, Insomniac is planning to include “a lot” of costumes, so odds are good your favorite version of Spider-Man will be represented in the game, be it Spider-Man 2099, Scarlet Spider, the Miles Morales Spider-Man (aka. Kid Arachnid), or the live-action Spider-Man produced by Toei.

As Spider-Man will be an open world game, it will be filled to the breaking point with optional sidequests, some of which were previewed by Game Informer. Several missions will be doled out by famous Marvel characters, such as Black Cat, Taskmaster, Harry Osborn, and Wilson Fisk; some times players will diffuse one of Taskmaster’s bombs, other times they will web-swing through pollution clouds to collect data. Players will also be able to randomly come across (and stop) dynamic general crimes such as car chases and store robberies. By dynamic, I mean what can start as a robbery can transform into a car chase. Intihar promises even more sidequests and “distractions,” and yes, this includes collectibles that will keep completionists busy for hours on end.

Spider-Man is set to release September 7, 2018 for the PlayStation 4. We will eventually find out if the game lives up to Insomniac’s promises.