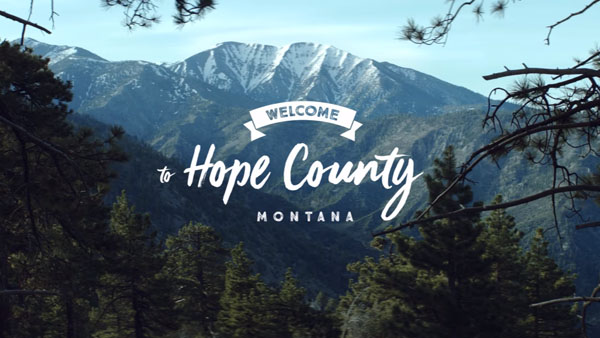 Far Cry 5 has finally hit store shelves, and it’s earned critical acclaim from several publications. We liked it a lot in our own review, especially the new location of Hope County, Montana. This realization of America’s Big Sky Country works every bit as well as the exotic locales we’ve become used to in Far Cry games gone-by, and it looks utterly gorgeous. What’s particularly striking about it, though, is its scale. This is one huge map – possibly the biggest yet seen in the series, which is pretty impressive given that Far Cry 4 featured at the top end of our list of the largest open world games of the generation.

While we haven’t quite had time to measure its entirety yet, we have timed ourselves crossing the map between its extremities. We’ve flown this time because, you know, walking through a countryside full of raging cultists intent on killing you isn’t exactly easy… So, taking to the cockpit of our trusty Crop Duster, we flew from the southeastern to the northeastern corner of Hope County. The flight time was 4 minutes and 47 seconds, traveling a distance of 8500 meters. Math tells us that would make the approximate speed of the aircraft 106kph or 66mph. Not exactly the fastest plane in the world, then. Still, the map size is certainly noteworthy. But if you’re wondering whether that makes it one of Ubisoft’s largest, for comparison’s sake, Assassin’s Creed Origins measures over 10km from point to point.

Check out our video of the flight below:

You can check out our thoughts about Far Cry 5 in our full review of the game, here.

Project Wingman Gets New Screenshots Showing its Aircraft in Action

Modder Adds Mandalorian to Star Wars Jedi: Fallen Order and It Looks Like an Official Skin

Destiny 2: Beyond Light Review – The Blueprint
To Top