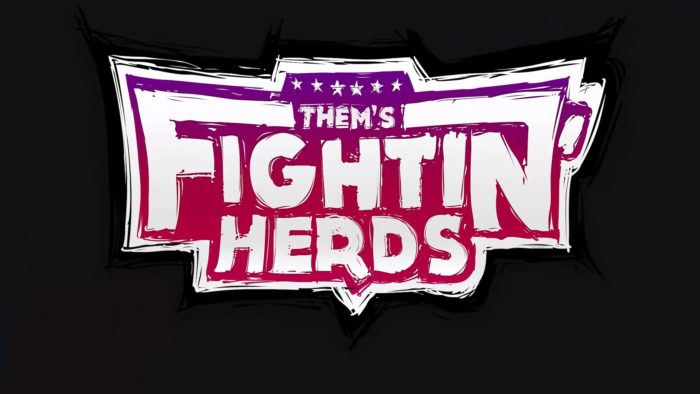 Usually when you think about fighting games, your mind pictures gruff men punching and hadouken-ing each other until they’re black and blue in the face. You don’t think about pastel ponies, cows, and other hooved animals kicking each other into unconsciousness (and occasionally oblivion). But, that’s exactly what Them’s Fightin’ Herds is all about, and it’s almost ready to let players in on the disparate mayhem.

Them’s Fightin’ Herds was developed by Mane 6, a group of developers who originally wanted to create a fighting fan game that starred the main characters from My Little Pony: Friendship is Magic. Hasbro didn’t take to kindly to the premise and issued a cease and desist letter, and normally that would have been the end of the story; it’s certainly what happened to fangames such as Pokemon Uranium and AM2R. But, show creator Lauren Faust stepped in and helped the people at Mane 6 create a new cast for their game so they could move ahead with their dream of having cartoon ponies kick the custard out of each other. Faust’s involvement speaks volumes of the potential the developers showed, and thanks to the release trailer, we can see that promise in all its magical glory.

The polish on display in Them’s Fightin’ Herds is downright breathtaking. Each character is fantastically realized; not only is the art style pleasing, but you can tell everything you need to know about each character, from her fighting style to her personality, just by looking at her. That is a sign of masterful character design. Moreover, the MLP-inspired art style belies impactful fighting animations, from simple headbutts to devastating dropkicks and beams of pure eldritch destruction.

Since Them’s Fightin’ Herds is an indie title, you wouldn’t necessarily expect much in the way of features, but Mane 6 stuffed the game full of them, from standard story and arcade modes to multiplayer lobbies. But the game’s most impressive feature is the touted “dynamic music” feature that changes the music depending on which characters are on-screen. Not only does the system affect the music that’s played during the beginning of a stage, but if one character starts dominating the other, her theme takes center stage. It’s the kind of feature that deserves to be in more fighting games.

Lauren Faust wasn’t the only person who took notice of Them’s Fightin’ Herds, as Mane 6 worked out deals for special lobby costumes inspired by characters from Guilty Gear Xrd REV 2, BlazBlue Central Fiction, and Skullgirls 2nd Encore. And no, these costumes aren’t paid DLC; they’re only unlocked by owning those games.

Them’s Fightin’ Herds will stampede onto PC on February 22nd thanks in part to Humble Bundle.