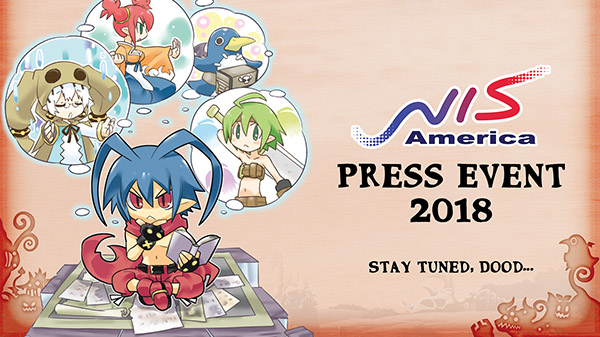 NIS America is going to host a press event next month on Feb. 9, with lots of “special guests” and “new announcements.” If you’re one of the lucky journalists in attendance, you’ll even get to try out some new games and see what all the fuss is about.

If you’re not able to attend, you’ll still be able to livestream the event, which means we should definitely plan for some cool new announcements that we’ll have to covet and over-analyze for the months following the announcement.

The official image for the event features some chibi Disgaea characters, and given the fact that Disgaea is arguably NIS America’s most popular series, we’ll almost certainly see a new release or something to do with those games at the event. At least, we can only hope. Here’s to wishing on a prinny that we get something new for Switch again announced during the event!

NIS America continues to publish some interesting games that others tend to shy away from, and with the Switch out on the market, it’s time for some awesome on-the-go titles to come from the company, but we’ve still got a little while to wait before we can check out the livestream. What do you think we’ll hear about in terms of new announcements? Let us know in the comments below!