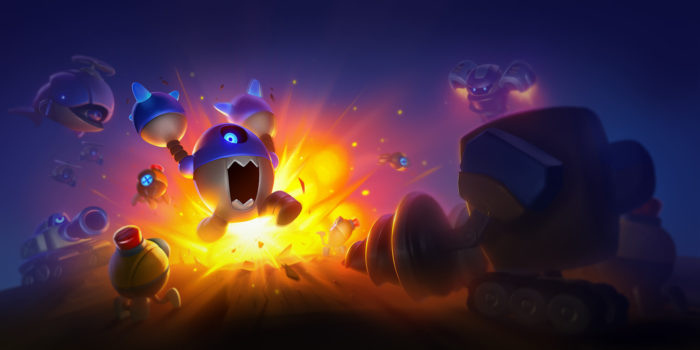 The HRX 2018 keynote was filled with epic videos of new characters coming to the worlds of SMTIE and Paladins. New lore0filled maps were shown off with intense sound tracks underscoring the dark stories often associated with the foundation of these characters and settings. The entire tone of these teaser trailers made Hi-Rez Studio’s announcement of their new game stand out even more in the most adorable way possible. The new game that Hi-Rez has on display at HRX 2018 is called Bot Smashers. Bot Smashers was described by developers as a base-building real time strategy game that focuses on quick gameplay so matches are relatively short compared to other games of the same genre.

Hi-Rez Studios CEO Erez Goren explained that many gamers find themselves feeling a bit antsy during matchmaking wait periods. He figured if they had to find something else to do to pass the time, why not offer them a game that will get the job done. It’s hard to believe that Bot Smashers was created solely for this purpose but its short, quick matches easily make it a great fit for anyone who really is just looking for entertainment between matches in another game.

Outside of focusing on the short match times and how downright adorable the robots were, there wasn’t a lot of additional information shared about the game. An early version of the game is available to play at HRX 2018 and players can sign up for beta testing now. While the game is currently only available for mobile, devs explained that if the game is received well they would certainly consider expanding it to multiple platforms in the future.