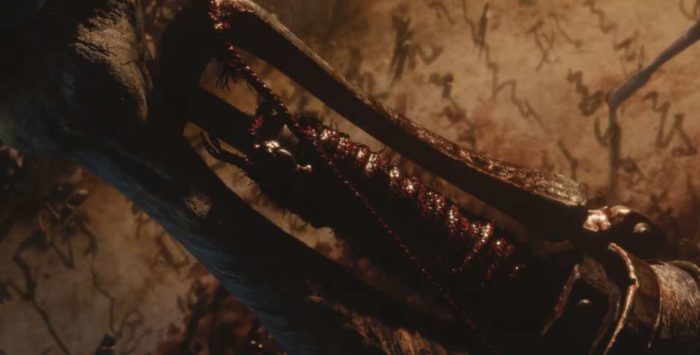 In case you missed it, a variety of new game announcements were made at The Game Awards 2017 last night, the likes of which include Soul Caliber VI and Bayonetta 3. Death Stranding debuted a new trailer and PlayerUnknown’s Battlegrounds finally introduced fans to a new map. When all is said and done, however, one of the most memorable teases came from Dark Souls developer From Software.

In the studio’s short video, the likes of which the internet has dubbed “Shadows Die Twice,” fans are treated to what looks like a bloody torture device of some kind, all while a faint tone reminiscent of feudal Japan plays in the background. While the gore was led some to believe that this is clearly a tease for the next Bloodborne, others are speculating that this rather a short glimpse at a new Tenchu game.

While From Software hasn’t confirmed one or the other, Yasuhiro Kitao, a member of the team’s communication department, offered an idea as to when eager fans can learn more about this mysterious new project. Spoilers: it may not be very soon.

In a post on Twitter the man said, “More details to follow in the next 12 months. We hope you look forward to it!,” then quickly went on to explain in Japanese that details are still “a while ahead” but that the team “won’t make you wait for a year for the next report.”

Though Kitao’s last words are somewhat heartening, this does seem to imply that the game won’t be making an appearance at Sony’s annual PlayStation Experience this year. This unfortunately may also mean that fans will be kept in the dark for quite some time, or at least until a leak pops up somewhere.