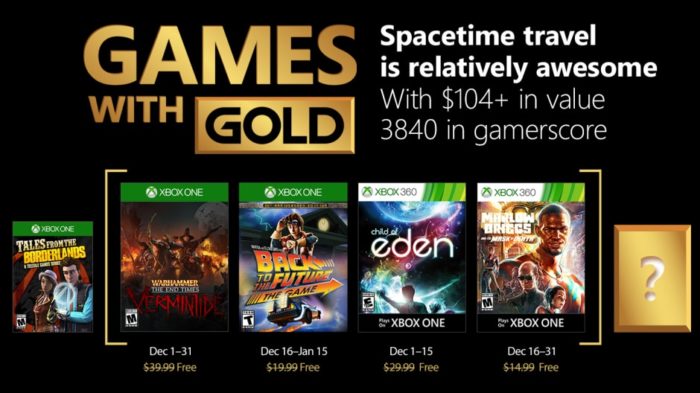 Microsoft has announced today via Xbox Wire its December lineup of Xbox titles for the Games with Gold program. Each game is included at no additional cost for Xbox Live Gold members, of course.

Fatshark’s Warhammer: End Times – Vermintide for Xbox One, Telltale Games’ Back to the Future: The Game – 30th Anniversary Edition for Xbox One, Ubisoft’s Child of Eden for Xbox 360, and Marlow Briggs and the Mask of the Deathfor Xbox 360 will all be available once December begins in two weeks. Both Xbox 360 games will be playable via backward compatibility on Xbox One and Xbox One X .

Whereas Warhammer: End Times – Vermintide will be available for the entire month of the December, the other Games with Gold titles will only be available for half of the month, allowing Gold members to snag the games either within the first 15 days of the month or the last 16.

Seeing as how November still hasn’t ended yet, interested parties should go and pick up this month’s offerings while they still can.

In other Xbox-related news, it was also recently announced that Casey Powell Lacrosse 16, Darksiders: Warmastered Edition, Gears of War 4, Mass Effect, Mega Man 10, Sherlock Holmes: The Devil’s Daughter, and This War of Mine: The Little Ones will be joining the platform’s Xbox Game Pass library on December 1.

One month of Xbox Game Pass is currently on sale for new members at $1. The monthly $9.99 service boasts over 100 full game downloads to install and play for as long as subscribed. The $1 offer is only available for a limited time, until November 27.