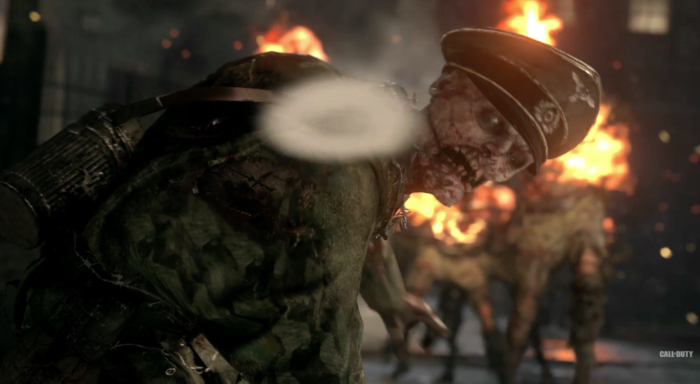 In previous zombie modes of Call of Duty, most casual players only contented themselves with surviving wave upon wave of zombies. Meanwhile, hardcore players were able to experience something more meaningful by completing a series of difficult tasks that fleshes out the story while unlocking unique encounters, weapons, and bosses. To cater to all audiences, developer Sledgehammer Games will introduce a casual-friendly story experience in Call of Duty WWII Nazi Zombies where all players can engage in major story beats, experience jump scares, and battle against bosses.

Speaking to the PlayStation Blog, development director Jon Horsley said Call of Duty WWII’s zombies mode has a prologue mission with a tutorial to accommodate new players. It will also have a “robust” hint system to help them know how to progress the story. Creative director Cameron Dayton adds that a traditional story experience was introduced to provide a more meaningful experience for newcomers.

“It’s a survival game with layers,” said Dayton. “As you move through different parts of the level and survive [against] faster and stronger waves of zombies, more clues and elements or chapters of the story are unraveled. So there’s this awesome aspirational sense that ‘I’m getting more story, I’m getting better weapons, [and] I’m getting better tidbits as I survive longer and longer.”

On top of the casual story experience, Call of Duty WWII Nazi Zombies will still have a “hardcore path” (or popularly known by series fans as Easter eggs). Similar to past entries, there’s no hand-holding in the game’s hardcore path, and players will have to keep their eyes peeled for any clues. Apparently, the hint system will only be available for the game’s casual path. Sledgehammer Games promises that players who try to delve deep in the hardcore path will unlock more unique weapons and experience a “more twisted story.”

Dayton assures gamers that all players will experience a satisfying game even if they don’t decide to pursue the hardcore path. “We’ve decided that canonically, the hardcore is the official story, but you get a reward even if you’re not willing to spend the arduous amount of legwork and brainwork to get into that.”

Call of Duty WWII launches on November 3 for PC, PS4, and Xbox One.