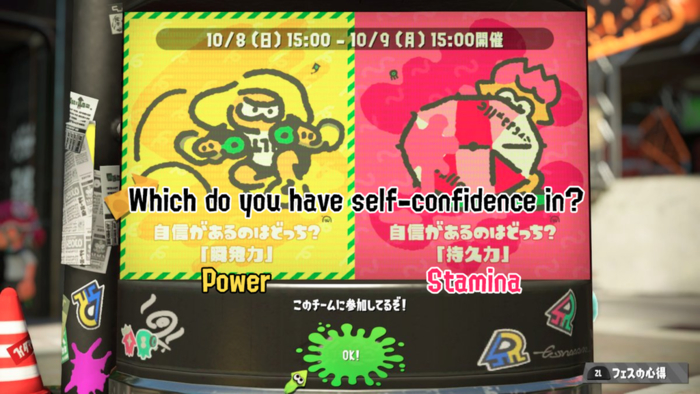 It’s finally the month of October, which means that it’s time for scary costumes, trick-or-treating, and of course Splatoon 2 – okay, Splatoon isn’t really a game fit for Halloween, but it’s always a good time for a new Splatfest. Thanks to a Reddit post by Frozenpandaman, we now know the details of the Splatfest in Japan for the month of October – and no, it’s not toilet-paper related like the European one.

This month’s showdown will pit players against each other depending on their battle styles. Thanks to a translation on Reddit, the two choices seem to be based around choosing to have power over stamina or strength over endurance – however you wanna see it as. The two pictures show an Inkling using the Splat Dualies and the other using the Splat-Brella.

Team Power will be lead by Pearl, while Marina will shepherd Team Stamina; the Splatfest will begin on Oct. 8 at 3 p.m. and will end on Oct. 9 at 3 p.m.

We’re still waiting to hear from Nintendo on what the Splatfest will be in North America for the month of October, so stay tuned for more information as we head into this month of spooks.