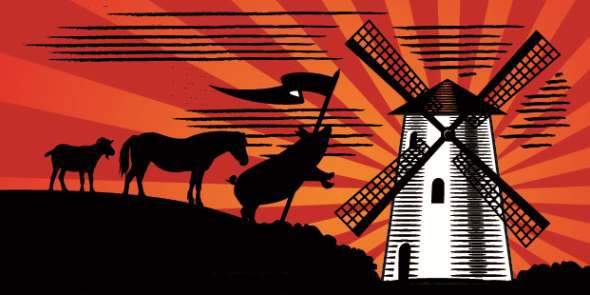 George Orwell’s classic novel Animal Farm is being reborn in the form of a video game, with an independent team looking to bring the title to fruition. It’s a strange decision, but an interesting one, considering the source material. Like the novel, it will follow Manor Farm’s unsettling narrative as the farm spirals into madness (and communism, in this form of social satire) and the barnyard animals find themselves dealing with a power struggle like they’ve never seen before.

The Animal Farm adaptation is being given two parts: one that plays out like a typical adventure game, and another part that’s more in tune with the “tycoon” genre, where players will have to make difficult choices and power moves to keep the farm in check. It sounds like it could definitely work, but the specifics of course remain to be seen.

Members of the project include Imre Jele from RuneScape, George Baker from Fable, Kate Saxon from The Witcher 3, Jessica Curry from Everybody’s Gone to the Rapture, and Andy Payne rom Gambitious, each member with their own personal responsibility when it comes to adapting the novel to a new video game format.

Currently, the team has yet to announce platforms or any projected release date for when we could potentially try it out, but more information will be trickling out over the next year or so. Giving something like this time to brew will hopefully mean quality storytelling and an engaging game to frame it all out with. It’s certainly a timely story that will mean much to anyone who plays it, and hopefully it’ll get younger players to read the original, too.