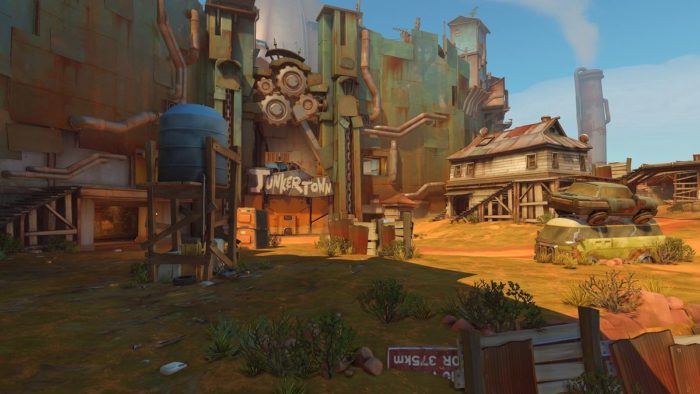 If you can’t wait to check out Overwatch’s newest map, Junkertown, there’s not much longer until you can play on it officially. It drops on September 19, but there’s a new video from Blizzard that illustrates everything you need to know about it with a behind-the-scenes look.

See how some of the sounds of Junkertown came to fruition as the Overwatch team went to a ghost town to record creaky old metal, a hand cranks, and lots of other spooky noises to accompany you and your team as you work to escort the payload.

The map finds you starting in the outskirts of Junkertown at Roadhog’s farm as you continue throughout the area with your payload, and the next section takes you inside Junkertown, checking out the bar, tattoo shop, and then the Scrapyard. The Scrapyard is where tons of battles take place, with rotating turbines, a shortcut for attackers and defenders to speed up the final stage of the map, and lots of other cool stuff.

Check out the video below to see more of Junkertown and the secrets surrounding its creation. One thing’s not a secret: It’s awesome to be welcoming another map into the fold, that’s for sure.