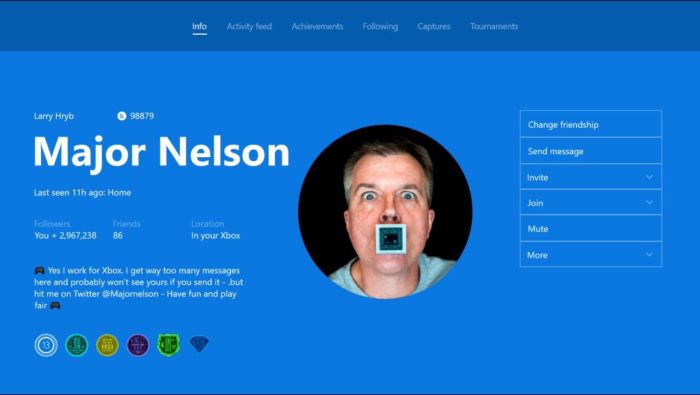 Xbox Live has seen quite a few new updates over the last few months, and now a pretty important one is here in terms of customization. If you’ve ever felt constrained by the gamerpics available to you online and wanted to be able to do something about it, rejoice! Microsoft has just announced via Larry Hryb (Major Nelson to you!) that you’ll now be able to upload custom Gamerpics going forward.

That’s right! If you want to show your rabid love for all things Joshua Homme and Queens of the Stone Age like me, or want to share an awesome Bayonetta pic, you can now upload images straight to your Xbox profile. As long as it abides to the Xbox Live Code of Conduct, you’re golden.

Additionally, you’ll now be able to use co-streaming via Mixer on Xbox One. You can three others can broadcast and invite others to join a stream straight from your system.

If you’re trying to find someone to play with still, check out the Looking-for-Group updates via iOS and Android, where you can submit requests and share to your activity feed while on the go.

There’s a lot to be excited about if you use your Xbox Live primarily for online gaming, so check out the full blog post in its entirety here.