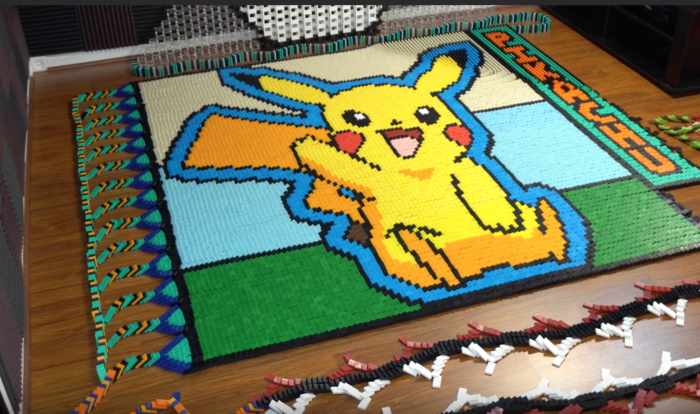 There is no shortage of mediums being used to create stunning fan art. Whether it’s the more traditional sketch of an iconic character or the impressive monumental LEGO build that brings a game’s entire world to life, there are quite a few impressive creations from gamers looking to pay homage to their favorite titles. What hasn’t been quite as common as massive LEGO art, however, is intricate domino art. Well one Pokemon fan decided to change that by using more than 22,000 dominoes to create a surprisingly detailed layout of dominoes that captures the many iconic elements of the Pokemon universe.

YouTuber TheDominoKing set up a grand total of 22,177 dominoes that come together to form a happily waving Pikachu, two large Pokeballs and tons of other decorative elements that really make the final product something to brag about. It even comes complete with a large Ash Ketchum. Just as a standing set the piece looks phenomenal but the real magic comes from how the piece looks when the dominoes are in motion. The wave effect falls over the entire piece beautifully and makes the entire image look even more vibrant than before.