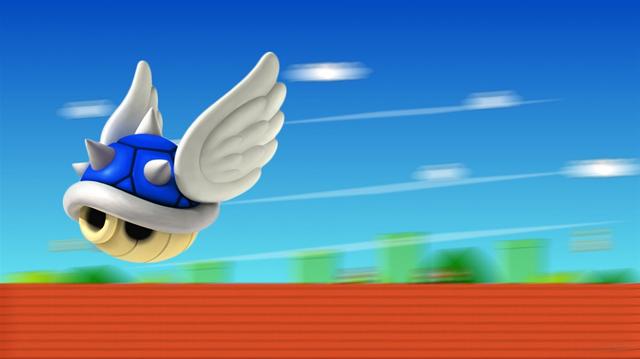 The checkered finish line in view, victory is so close that you can taste — until you taste something very different. There are few feelings in gaming worse than losing a Mario Kart race in the final stretch because some jerk way back in the pack and completely out of the race got a blue shell and chucked it your way, exercising his only in-game option for taking out his frustrations.

Yes, when you’re in first place, Mario Kart’s blue shell is an abomination that removes skill from the equation in the name of parity. For those racers hopelessly getting their butts kicked, though, the blue shell likely won’t help them win, but it can help them prevent someone else from doing so. Regardless of your personal feelings toward Mario Kart’s great equalizer, Kosuke Yabuki, who directed both Mario Kart 7 and 8, thinks the series just wouldn’t be the same without blue shells.

“We’re always experimenting with what new elements to introduce or what elements can be removed,” Yabuki told Eurogamer in a recent interview. “We have tried — or we are trying — to see what the game’s like without the blue shell. When we’ve experimented without the blue shell, actually it feels like something’s missing. Like there’s something not quite enough in the game. So for now we’ve kept it in.”

For Yabuki, it’s about more than just gameplay balance too. The director got all philosophical when talking about the blue shell, saying he considers “the human emotion element of the play experience” when making gameplay decisions.

“So for example playing Mario Kart — if you have something that feels unfair or makes you feel frustrated or makes you angry… Everyone is different in that respect,” he continued. “What you will feel is unfair might be different to someone else. As far as possible we want to avoid those feelings of frustration.

“Because everyone is different, and it’s an emotive thing, you can’t pin it down with a set formula. Ultimately, in the longer term, although everyone might feel on one particular day that they’re so frustrated that they’re not going to play any more Mario Kart today — keeping the experience enjoyable enough so that you might feel like that today, but the next day, the next week, you’ll still go back to Mario Kart and still enjoy it.”

Who knew Nintendo had such deep thoughts about the god damn blue shell?