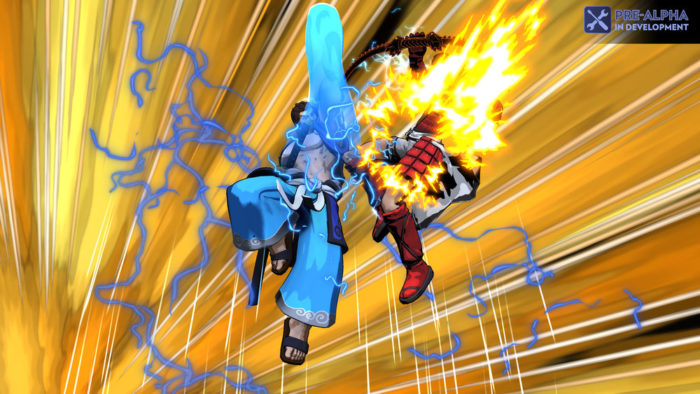 The man who once served as the lead developer behind Street Fighter HD Remix is now hoping to bring a “radically accessible” fighting game to the market next year. David Sirlin, the head of Sirlin Games, recently announced that his studio has been hard at work on a fighting game called Fantasy Strike. Developers hope the game will provide a challenging yet simple experience for players who may have been intimidated by fighting games in the past. In addition to catering to newcomers of the genre, Sirlin also claims that the game is meant to serve as a common ground for fighting game players who spend the majority of their time playing different games. The idea here is that the game’s controls are so simple that any fighting game background at all will make you extremely efficient in this particular title, thus giving a Mortal Kombat player and a Street Fighter player equal chances of emerging victorious. Keep in mind, however, that this is still only a theory.

Fantasy Strike has been in development for two years, according to a press release, and now Sirlin Games is looking to the public to garner more funds to support the project. Crowdfunding efforts for the game are being channeled through Fig where the studio will be accepting up to $2 million in investment. Those who pledge at least $49 to the campaign will actually receive a playable version of the game once the campaign comes to an end. The game is not scheduled to release until late 2018 so it’s safe to say that the version given to these contributors will be a rather incomplete version of the game aimed more towards showing off the studio’s new approach to fighting game mechanics.

That new approach, however, is also where the game will likely see its first major hurdle. If Sirlin Games is looking to do something that nobody else is doing at the moment, they have certainly succeeded. We will just have to wait and see if there’s a reason nobody else was taking this incredibly simple approach. Unlike most other fighting games, Fantasy Strike has no crouch button whatsoever. There is also no input you’ll use to reverse you opponent’s throws. Instead, throws are automatically reversed if you are not pushing any buttons at the time your opponent attempts the grab. You’re even given a handicap when it comes to accuracy with inputs. Fantasy Strike will automatically repeat your input for 8/60ths of a second to ensure whatever move you were attempting actually comes out. The goal is to have players focus on making decisions in the game rather than struggling just to get the correct moves to appear on the screen. It’s a new approach but one that feels like it could be watering down the very joy most people find in fighting games. Less options typically means there are fewer opportunities to read your opponent, fewer different ways for you to react and far less variety in gameplay. Then again, this unusual strategy could be a major success for those who never liked counting frames, learning combos or dealing with input overload in the first place.

Fantasy Strike is scheduled to release on Steam and PS4 in late 2018.