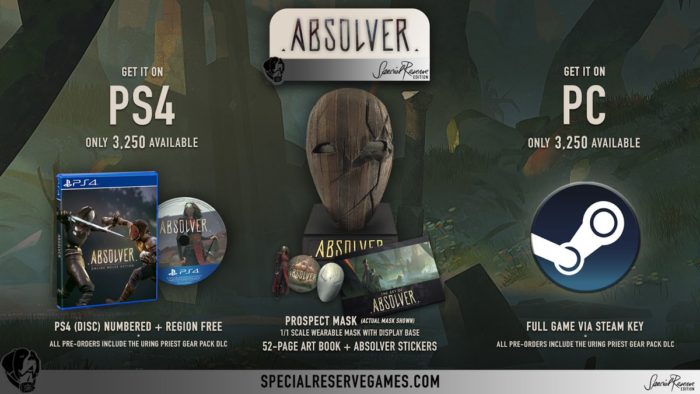 Devolver Digital released a tweet into the wild today showing off Absolver and it’s very limited special edition version of the game. All players, no matter which system they are purchasing for will get a Prospect Mask with a display base, a 52-page artbook, as well as an Absolver sticker pack. But, if you pre-order for a PlayStation, you will get a limited physical copy of the game. Steam users, however, will be sent a key that will unlock a full game. The special edition of Absolver costs $75, and there are 3,250 PC copies, as well as 3,250 PS4 copies.

In addition to pre-ordering the special edition of the game, you can now also pre-order the standard version of Absolver with some perks. You will be able to apply a 10% off coupon to your pre-order, bringing the standard edition to $27 instead of its usual price of $30. And, no matter if you spring for the special or standard copies of the game, everyone who pre-orders gets access to two DLC packs. The first being the Labyrinth Prospect mask, and the second is a gear pack called the Uring Priest.

Not sure what Absolver is? It is a 3D action and fighting game with a focus on online play as well as 1-on-1 combat. It will also feature cooperative play that centers on adventure. Absolver is available on Aug. 29 for PlayStation 4 and PC.