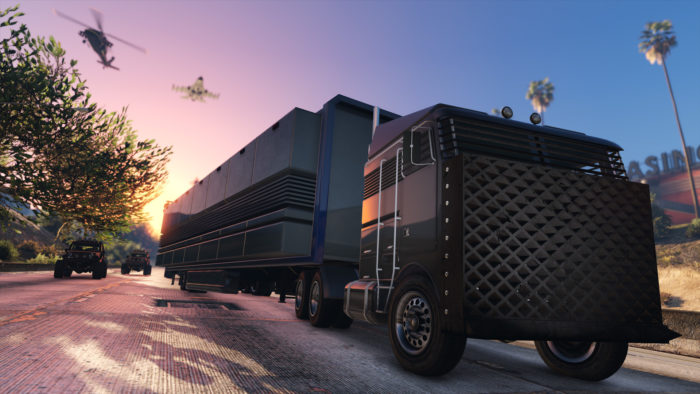 The Gunrunning update for GTA Online is now available for Xbox One, PlayStation 4, and PC. The title update for the multiplayer portion of Grand Theft Auto V, revealed last month, comes with new content and bug fixes for all platforms.

The new Gunrunning activities in the update allow players to become arms dealers by assigning employees to make weapons or research upgrades, then move the stock for potential buyers. Players must be a CEO, MC President, or VIP to start these missions, but the cash requirement for VIP status has been lowered from $1 million to a minimum $50,000 in a player’s Maze Bank account.

Bunkers can now be purchased as properties and upgraded with a shooting range, personal quarters, and a gun locker. The underground properties can also hold the new Mobile Operations Center, which features like customization workshops and storing vehicles.

Other new content in the update include weaponized vehicles such as an APC and a flying motorcycle with machine guns, MK II variants of various weapons, clothes, tattoos, and haircuts. Rockstar is also offering exclusive in-game clothing for players who log in from June 13-19. Check out the GTA Online Title Update 1.40 patch notes for a long list of bug fixes that affect all platforms.