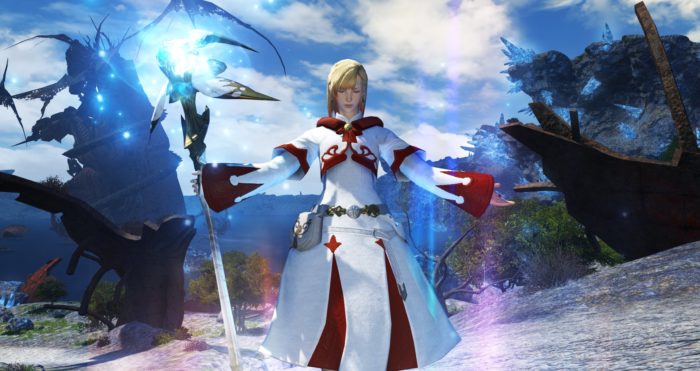 If you’ve been keeping up on the latest Final Fantasy XIV: Stormblood news, you’ve likely heard about the dramatic job action changes that will be coming when the latest expansion drops on June 20. While some fans are overjoyed and excited for the changes that are about to go live, others are a bit concerned. In particular, White Mages and tanks (especially Warriors) have been vocal in their worry that the changes are too much or are setting up their job for failure come Stormblood time.

At E3 2017, Twinfinite had the opportunity to sit down with FFXIV director Naoki Yoshida to discuss the controversial changes and get his thoughts on the subject. When asked about the growing concern from many White Mages that the Job Action changes aren’t doing enough to let White Mage compete with Astrologian and Scholar for high-end raid spots, Yoshida-san had this to say:

“So the information that are players are seeing being posted on articles and what not was information that was revealed during our media tour, that was actually based on a build that was latest as of end of April and since then we’ve still continued to make changes and updates. We first want to say ya’ll need to calm down a little [laughter].

But yeah if you’re just looking strictly at the actions, it’s very misleading. You still need to look at what your max MP is going to be, and how much MP you’re depleting using some of these actions. That will affect your DPS per your allocated time while you’re still healing. At this point all we can say is that there’s only a few more days, until Stormblood is released so we encourage players to try it out for themselves.”

He wrapped up by adding:  “If there is any sort of disparity in the balance we will make sure to go back and address it at a later time.”

Yoshida-san seemed very aware of the concern. Despite utilizing a translator, the moment the words White Mage came out of my mouth, he grimaced playfully as if he knew something difficult, or something he’s heard about a ton by now, was coming his way.

While it remains to be seen whether or not White Mage will compete well enough at Stormblood’s launch, if the development team’s past history is anything to go by players shouldn’t have anything to worry about in the long term. For example, look where Astrologian is now, versus where it was at Heavensward’s launch. The difference is staggering.

Yoshida-san also elaborated on the decision making behind the tank changes as well. When asked about how the addition of job gauges will impact tank stance switching, he said this:

“So first and foremost, for the three jobs within the tank role (the Paladin, Dark Knight and Warrior), our intention was to make the adjustments when you’re switching stances, that’s the foundation of the approach.

Have you calmed down a little since the reveal of the job action changes or are you still in panic mode as FFXIV: Stormblood quickly approaches? Let us know in the comments and be sure to check out our full Q&A with FFXIV director Naoki Yoshida from E3 2017.