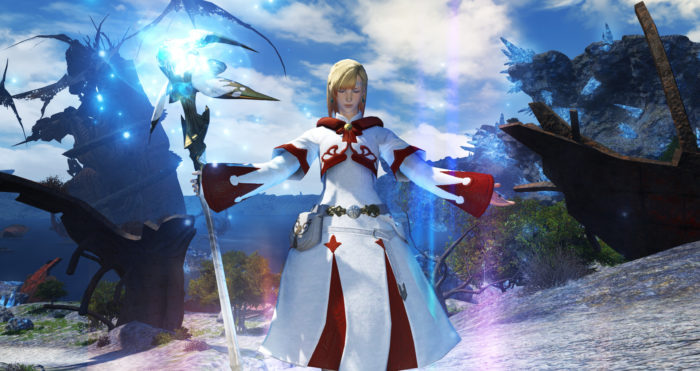 At a recent media event held by Square Enix, members of the media were able to share with players the details of the long awaited job action overhaul that has been teased for Final Fantasy XIV’s next expansion, Stormblood. It’s even more dramatic than some players might have initially believed it would be. Some jobs will function very differently than they did in Heavensward and A Realm Reborn, especially when it comes to their function within higher skill raid content.

In general, we believe the changes are an encouraging step forward as it makes the jobs within a role more distinct from one another, and nudges them in a direction that feels more in line with their iconic images. However, when you delve into the specifics, and what jobs are losing/gaining what, it’s not all roses and sunshine for everyone.

Perhaps the most controversial and talked about change is to White Mage. No other job was hit as hard by the addition by subtraction method employed in these changes than the quintessential Final Fantasy healer class. Formerly White Mage exclusive skills, Shroud of Saints and Divine Seal, have been tweaked and turned into role actions which can be used by any healer job now. Virus, previously usable by White Mage as a cross-skill, is now exclusive to DPS casters, and Stoneskin has been removed from the game entirely.

Still despite all that, White Mage is getting some buffs and new helpful actions as well.  Their raw potency on many actions were increased, Benediction got a healthy reduction in cooldown time, and they received a number of new toys to further define them as the ultimate pure healing class such as Thin Air and Plenary Indulgence. Also notable, White Mage received a new Secret of the Lily mechanic which offers up reduced recast times in exchange for focusing on Cure spells. If what you need is as much healing as possible, White Mage is still going to have you covered.

The problem is over the top healing isn’t what the (current at least) meta asks for. Final Fantasy XIV is a very DPS (damage dealing) focused game. Once the mechanics are discovered, difficult raid bosses are less about surviving, and more about balancing how hard you can DPS with not screwing up the mechanics and causing a raid wipe. At least in the current content, most raid parties would much rather sacrifice a bit of an edge on healing potential that White Mage has, for the synergy with DPS classes that both Astrologian and Scholar provide in 3.0, and will continue to provide in 4.0.

It’s probably too early to panic, but that hasn’t stopped fans from getting very nervous on places like the FFXIV official forums, or teasing White Mages on places like Twitter.

That said, no one knows what the meta in 4.0’s end game content will demand yet and for most of the content in the game such as dungeons, what job the healer is won’t matter. All but the most hardcore of players will be able to enjoy playing White Mage just fine. Players have voiced their concern and a consolidated feedback thread has been pinned on the Healer Role section of the official FFXIV forums. We’ll have to wait and see if the development team decides to make adjustments before Stormblood, or let the meta settle first.

White Mage is arguably the most talked about, but it’s far from the only job worth discussing. Bard is also getting a major face lift. The class, which was forced to root itself like a caster after its Heavensward changes, will be essentially an entirely new job come Stormblood, focusing on rotating through all their songs (which are also now completely different) and choosing when to use a powerful Troubadour ability which adds another beneficial effect to the song for the duration of it. Basically, it’s going to be more of what it’s supposed to be, you know, a Bard playing songs and stuff. Depending on how resistant to change you are, or whether or not you enjoyed Heavensward’s style of Bard, you could find these changes thrilling or tragic.

Some Warriors aren’t overjoyed with their changes either. They received a lot of new DPS toys, in addition to the ability to use its powerful Fell Cleave weaponskill up to six times. However, all of these powerful action consume a new ‘Beast Gauge’ and switching stances will consume half of that gauge. Meaning Warriors need to be much more selective about when they switch stances. In addition, Warriors will also lose Bloodbath, a skill that was useful unlike many that are being permanently removed.

It’s not all doom and gloom though for every FFXIV job. Paladins, who have been the odd tank out for many raid parties, received the very welcome news that they would be able to block magic damage with their shield starting in 4.0, a massive buff to its defense and is something that is unique to Paladin only. To help with its DPS, another area where Paladin lagged behind both Warrior and Dark Knight, it’s getting Holy Spirit, a 430 potency nuke. It will require some MP management to use for sure, but it’s still a great addition to Paladin’s arsenal.

Get pumped to Akh Morn Summoners.

Monk, another job that was really pulling to get some love, is getting some. The “Riddle” skills that are being added gives Monk a toolbelt of self preservation and DPS enhancing tools, while Brotherhood is a straight buff to both the Monk’s and nearby party member’s DPS that can also facilitate quicker Chakra gain. Dragoon’s rotations have been dramatically simplified with the removal of a few skills, and that Geirskogul will no longer decreases your time in Blood of the Dragon.

It’s a chaotic time right now to be a FFXIV player. Everything is in flux. All the things players know and love about their job might be getting ratcheted up to another level if say you’re a fan of something like Dragoon or Summoner who is finally getting a cleaned up DoT rotation, a renewed focus on pets, and the ability to summon Bahamut. Or, you might be getting the rug completely pulled out from underneath you if you’re players of the aforementioned White Mage or Bard. Both those jobs might end up being completely fine, but even if they are, will they still be recognizable and fun to everyone who mains them? We’ll have to wait and see when FFXIV’s next expansion, Stormblood, officially releases on June 20 for PC and PS4.