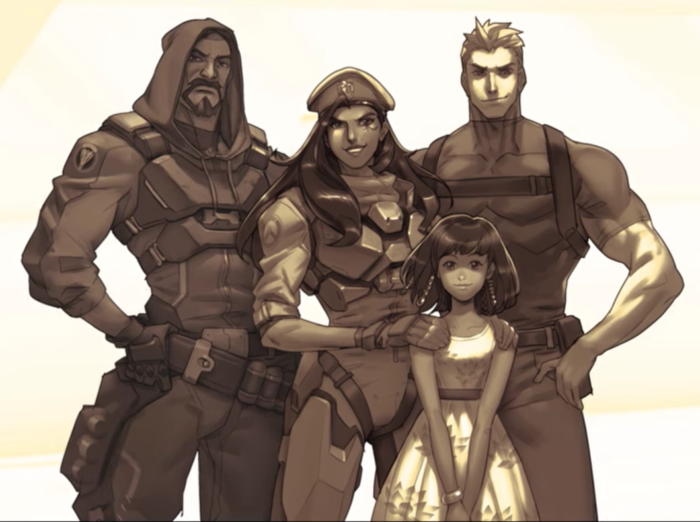 The characters of Overwatch have all turned out to be much more connected to one another than you would think at first. Several of them are either related to one another or know each other personally outside of work. As such, it’s led to fans creating several headcanons and theories about the members of the titular organization. For Pharah Amari, the JUSTICE!-declaring security expert with a suit of armor, much discussion has been made about her parentage.

We already know about her mother Ana, but one thing that’s had fans in a tizzy is just who her father is. Many speculated that it was Gabriel Reyes before he became Reaper, others thought it was Jack Morrison pre-Soldier: 76. (There’s also a smaller sect of fans who think Reinhardt is her father.) The three of them have been primarily made out to be the Golden Trio of the titular organization, and those same fans also like to think of them as the Not Actually Dead club. And for those of you hoping one of them would be the father, the Overwatch Uprising event that began earlier today has decided to crush your dreams on that front. A new spray for Ana, titled “Newborn,” shows the elder Amari holding her little bundle of joy. Next to her is a long haired man who may indeed be Pharah’s poppa.

Yeah, so sorry about all the fan theories out there amongst Overwatch fans thinking Pharah followed in Jack or Gabe’s footsteps. You could make a case for it being her uncle, but that would be a bit of a logical leap to make. It’s unclear if the man is currently still alive in the canon, or if he’s the guy Pharah went to go see in the Reflections comic. Given how much time that Pharah spent with her mother, it doesn’t seem like the guy is still in the picture, but that doesn’t mean he has to be dead; they simply could’ve divorced, after all.

Regardless of if he’s still alive, Overwatch fans should know that it doesn’t automatically makes him Pharah’s father in the sense where it counts. She grew up with a lot of people in her life to guide her, and since those people included Reyes and Morrison, it’s perfectly fine to imagine them as Pharah’s dads who raised her when Ana couldn’t. You can still keep your headcanons and just ignore this spray, if you’re so inclined.