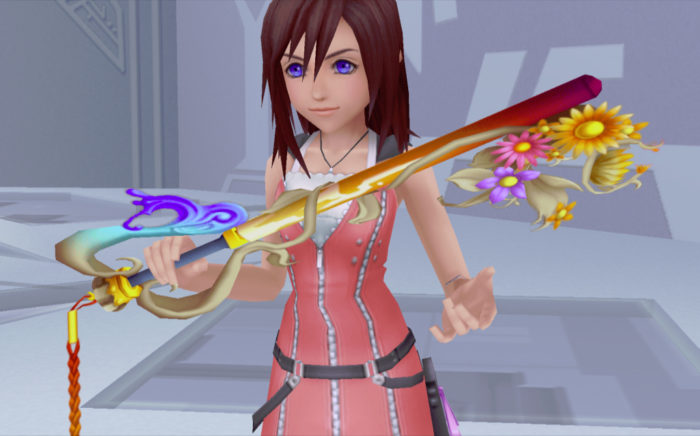 Kingdom Hearts fans recently received a special look into the Kingdom Hearts III backstory from a pretty unusual place—an orchestral concert tour. Gamers in Japan thought they were showing up for the usual orchestra concert experience but during the show the Japanese voice actresses for Kairi, Xion and Aqua surprised the audience by popping up to perform a few lines. Twitter user momo_krys translated all the lines performed by Risa Uchida, who voices both Kairi and Xion in the Japanese version of the game. The lines provide a look at what Kairi has been up to since the conclusion of the last game and how her training with Lea has been going.

“I’ve come to train to become a Keyblade wielder,” Kairi explains, according to momo_kry’s translation. “Until now, I’ve only been waiting for you guys to come back from your journey. Maybe with this I can at least help out a little.”

Kairi’s lines also discuss how Lea has continuously apologized to her despite the fact that she has already assured him that everything is okay. “Lea’s training with me. He’s apologized to me over and over again… at first I was a bit scared but as we trained together we started talking to each other. I found out Lea also has a best friend he wants to save. I feel like, he’s not a person I can bring myself to hate.”

The performance concludes with Kairi encouraging Sora to remain “cheerful and bright” because his journey is one that will “save many hearts.”

Risa took the stage again during the concert, but this time taking on the role of Xion. This performance was shorter than the one for Kairi and didn’t necessarily provide as many clues and information about Kingdom Hearts III’s backstory. Instead, it was focused on being a show of gratitude on Xion’s behalf.

“On the day you first called my name it made me feel like I had a heart,” Xion’s lines began. “If I hadn’t met the two of you, I wonder how my ‘everyday’ would’ve been.”

At the end of this performance, Xion spends more time simply giving thanks before wishing that “those same old days could have continued on longer.”

Unfortunately, there is not a full translation available for Aqua’s lines during the concert but momo_krys explained that the lines were essentially just Aqua reaching out to Ventus and Terra and, in a very loose translation, asking them to “become the light that will guide Aqua through the darkness.”

At this point, it is unknown if voice actors or other special guests will be making appearances throughout the Kingdom Hearts Orchestra World Tour. It’s also unclear if Kingdom Hearts III will be released in time for current fans to enjoy it or if that pleasure will be reserved for their great grandchildren.

For now, some canon lines performed during an orchestra tour is the closest thing we have to the long awaited game. The tour will be headed to Paris next before making stops in London, Singapore, Shanghai, Los Angeles and New York.