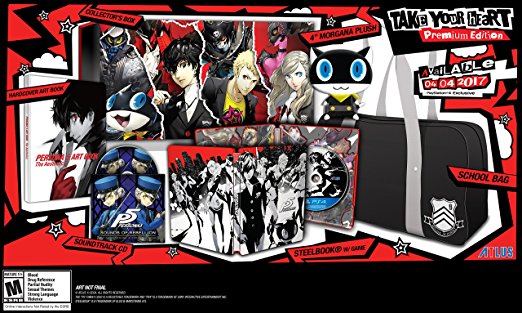 Persona 5 will finally be releasing in the west on April 4, and if you’ve pre-ordered the game’s premium limited edition, now’s a good time to take a look at all the goodies that you’ll be getting with it. Atlus has uploaded a comprehensive, 9-minute unboxing video for the premium edition, and you can check it out down below.

The premium edition comes with the steelbook edition of the game, a hardcover artbook, a cute Morgana plush, a selection of songs from the game’s soundtrack, as well as a hand-carried bag similar to the ones carried by the characters in the game. Overall, it’s a pretty sweet package, the fans of the series should find themselves pleased with the exclusive items in the box. Atlus also mentioned that all of the items are indeed exclusive to the premium edition, so if you want them, you’ll have to purchase this edition of the game.

Persona 5 is set to be released for the PS4 and PS3 on April 4. The game is already available in Japan.