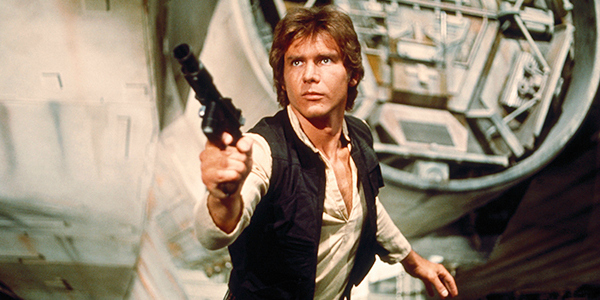 When it comes to Star Wars films there is always one simple fact that everyone can bet on — filmmakers will remain tight lipped about the movie’s details outside of official press announcements and movie trailers. When it comes to the upcoming Han Solo film, however, we have all been fortunate enough to get more information than most fans would have expected a whole year ahead of the film’s scheduled release. To be clear, there still isn’t a ton of information out there but it’s just exciting to see more details emerging.

Disney CEO Bob Iger confirmed that the upcoming Han Solo film will cover six years of the iconic Rebel leader’s life, starting from when he was just 18 years old, according to Wall Street Journal reporter Ben Fritz. Fritz sent out a tweet stating that the film would show how a young Han Solo found the Millennium Falcon, met Chewbacca and ultimately got his name.

Han Solo movie will follow him from age 18 through 24 and show him finding the Falcon, meeting Chewbacca, and getting his name, Iger says

Of course, these new details don’t necessarily come as a surprise. Iger has previously confirmed that the untitled film would finally show fans exactly how Han and Chewbacca’s relationship evolved from a mere life debt agreement to the kind of genuine friendship we all wish we had. Iger had not previously confirmed that the film would detail Han’s discovery of the Millennium Falcon but that is a part of Han’s story that would just be absurd to omit from the movie.

So while the new details that were released were far from being groundbreaking, it does show an unusual eagerness from Disney’s CEO to actually share some knowledge about the movie’s progress outside of a major press event. That also means there is a better chance for fans to successfully dig some more details out of Iger, or anyone else involved with the movie, every time they so much as utter a single word to the media.

The Han Solo movie is currently scheduled to hit theaters on May 25, 2018. This will make it only the second stand alone anthology film of the Star Wars series.