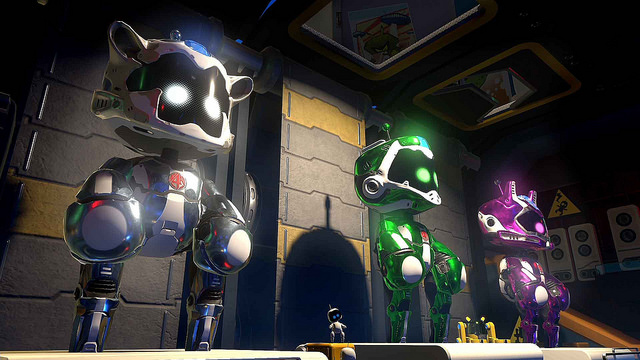 Toy Wars is a new game for Japan Studio’s The Playroom VR that is now available to download, free of charge. A 4 player co-op tower defense style game, Toy Wars tasks players with shooting down enemy waves without getting hit.

Like other Playroom VR games, Toy Wars allows other players (in this case, three others) to connect locally with their Dualshock 4. The player on the VR set does the shooting while the players connected through controllers play as giant mech versions of the Playroom VR’s lovable robot mascot and are restricted to melee attacks. However, each mech will have their own unique abilities, allowing for some diversity in gameplay.

Not much else has been said about the game, as Playroom VR games are quite simple to begin with. Instead, Japan Studio creative director Nicolas Doucet encourages PSVR owners to grab the new game on the PlayStation Store. If you’re on your computer or mobile, you can add the game to your account here and download it through your console at a later time.

Toy Wars is The Playroom VR’s first add-on. The base game includes the following mini-games utilizing the VR headset: