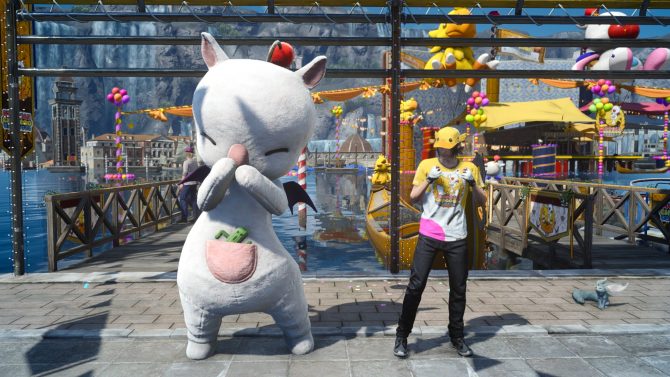 I was a little skeptical when Square Enix announced the brand new Moogle Chocobo Carnival event for Final Fantasy XV. I mean, it just sounded so incredibly lame. But the company has released a new trailer showing off what we can expect at the carnival, and I am sold. You can check out the new trailer down below.

Just look at that dancing Moogle mascot. And Noctis dancing along with him in that ugly shirt and hat, being an absolute doofus. That’s probably the most lively we’ve ever seen Noctis in the entire game. Not only that, there are carnival games where you shoot things, and there’s more big fish to be caught. There’s even an in-game Square Enix cafe where you get to eat Moogle and Chocobo-themed food. How awesome is that?

The event starts on January 23, 5pm PT, and ends on February 19, at 4pm PT. It will take place in Altissia, so I guess you have to at least unlock the new city before you can participate.

Final Fantasy XV is now available on PS4 and Xbox One.