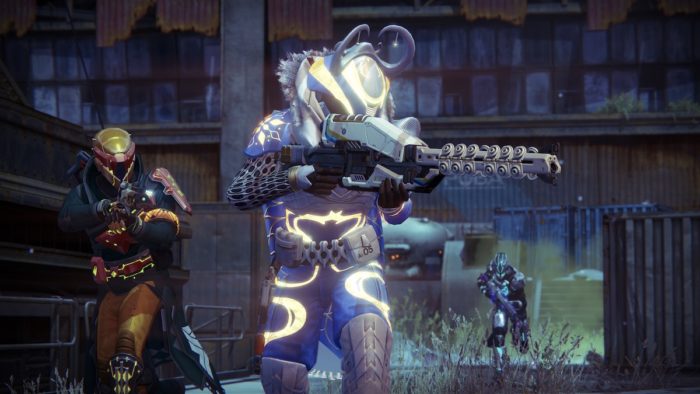 One of the newest features to enter Destiny this week was the inclusion of the Strike Scoring playlist that tasks Fireteams to obtain as many medals and points as possible. This then rewards users with either Bronze, Silver, or Gold medals based on their group’s performance. Accompanying this mode are three challenging bounties offered by the Vanguard that will put your skills and speed to the test, with the most grueling being the Make a Rainbow one.

This requires Guardians to get a Primary, Secondary, and Heavy Streak in a very quick succession, awarding them with a Rainbow Medal. Given you need at minimum nine foes to do this, this can be quite challenging, however there is a far easier way to complete the Make a Rainbow bounty. Instead of fighting it out with your Fireteam for kills, load up this week’s Nightfall and start it. You will be dropped at the very beginning of The Nexus strike, where endlessly spawning Vex and Fallen soldiers will arrive.

The key to this is that these enemies are actually not scaled up yet as this area is still considered part of the overworld and not the mission, meaning they’re all between levels 11 and 12. From here, wait on top of the ship until a big enough group of Vex and Fallen spawn, then hop down and begin farming for a Rainbow Medal.

You will need to kill three enemies per weapon while it’s out, which means after you slay three Dregs, swap to your secondary for an additional three kills, and finally your heavy for the last three. We recommend using a machine gun or sword, as your rockets reload slowly and can be unreliable if the targets are scattered out. Also, consider using a shotgun as a secondary, so that if you need to kill Hobgoblins they won’t have a chance to activate their shields and become immune.

It may take a few tries to get into the rhythm of it, but this is by far one of the fastest ways to nab the Make a Rainbow bounty. If you spawn into a Nightfall and there are already people farming, either wait your turn or simply reload the map until you get a place that’s virtually empty. Now, hopefully, you will get an Icebreaker for all your troubles rather than more base Destiny legendary gear.

Destiny The Dawning: How to Get Rainbow Medals [Update]