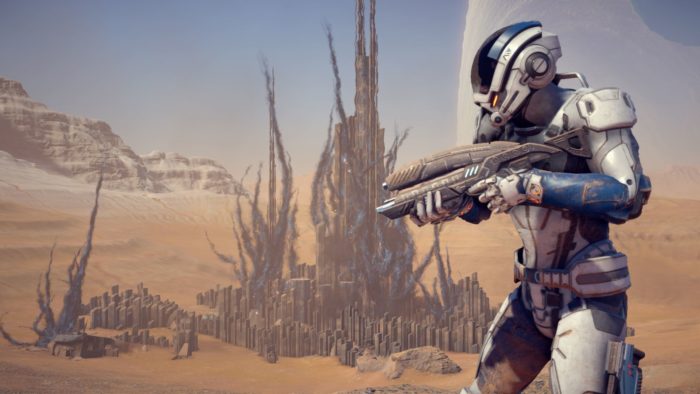 Game Informer has released four new exclusive screenshots of Mass Effect: Andromeda, along with some extra details about the game. We’ve already seen how beautiful the game looks in its PS4 Pro footage and the latest N7 trailer, but here’s another look at the world and environments, and what looks awfully a lot like the Mako from Mass Effect.

‘This vehicle is called the Nomad. It’s like the Mako from the first Mass Effect, except it controls better and doesn’t have any offensive weaponry. Rather than create two different combat systems – one for on-foot and one for vehicles – the team at BioWare decided refine just the third-person gunplay. The planet the Nomad is driving across is Elaaden, a scorching (and optional) desert world.’

In addition to that, you scan objects around the world to find blueprints and unlock new crafting recipes for your equipment and gear. Unlike past Mass Effect games, Andromeda won’t lock players into a single progression path either. According to Game Informer, players will be able to learn any skills they’re interested in.

Mass Effect: Andromeda is set to be released for the PS4, Xbox One, and PC in spring 2017.