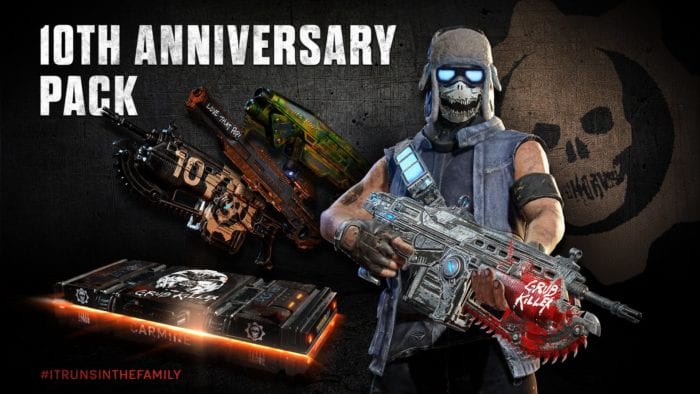 The 10th Anniversary Gear Pack is now available to purchase in Gears of War 4. The Coalition is celebrating the 10th anniversary of the Gears of War franchise today with the new pack, returning multiplayer playlists, and community events.

The newest gear pack also celebrates the Carmine family, a group of characters that often die throughout the series. The latest member, Gary Carmine, is now available as a playable multiplayer character and cosmetic emblem from this Gears of War 4 pack.

The 10th Anniversary Gear Pack contains one 10 Years of Gears customization item, one event emblem or bounty, and a random card from the launch series of cards. Each pack costs 200 in-game credits and cannot be bought with real money, unlike the recent Run the Jewels Air Drop. The full list of its contents below:

In addition, fan-favorite multiplayer playlists such as the sniper heavy “One Shot, One Kill” and “Gnashers-Only King Of The Hill” have returned. The developer is organizing a “Game with Developers” event for next week to play Gears of War 4 with fans, though details on how to join will be announced soon.