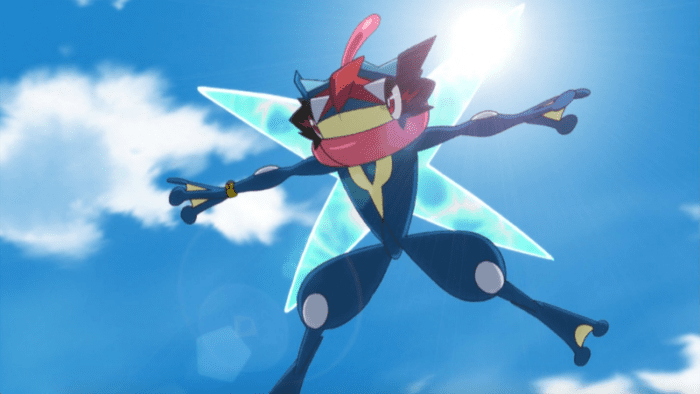 A new Pokemon Sun and Moon trailer (see below) dropped today via Pokemon’s official YouTube channel, and boy is it a doozy. Not only did it finally reveal what the mid-evolved form of the starters finally look like, but they dropped a ton of new information that should be especially exciting to fans of the anime, and generation 6.

Fans that download and play through Pokemon Sun and Moon’s “Special Demo Version” which releases on Oct. 18, will be able to bring back with them a special form of Greninja called Ash-Greninja. A Greninja that becomes charged up through its bond with its trainer, and takes on a presumably more powerful form via its new ability Battle Bond. It’s a little murky as of right now as far as how it actually works, but if you want to read into it a bit more, you can read Ash-Greninja’s full description here. Here’s a short snippet of that description:

Greninja that can become Ash-Greninja have an Ability that no Pokémon has ever had before—Battle Bond. The Battle Bond Ability triggers this Pokémon’s form change to Ash-Greninja after it causes an opponent’s Pokémon to faint. When the battle ends, the Pokémon returns to its original Greninja form. This form is only for battles where it needs to break the limits

Also confirmed for release (finally) for Sun and Moon is Mega-Evolutions. Although no new Mega-Evolutions have been revealed yet (or confirmed to exist at all at the moment), it’s finally out there that any “Mega-Evolving Pokemon that can be caught in the Alola region will be able to Mega Evolve in Pokémon Sun and Pokémon Moon, as well.”

In addition to those two big announcements, there were a number of new features revealed as well. The Festival Plaza is a new social feature that allows you to visit other player’s festival stands, earn a new currency called FP, and spend that currency to gain benefits such going on rides that increase the base stats of your Pokemon.

Perhaps even more exciting is the reveal that Pokemon stored in your PC in Sun and Moon will finally be able to make themselves useful via the new Poke Pelago islands. Your stored Pokemon can freely visit special islands that allow them to do things like drink special drinks that raise their stats/exp, attract other new wild Pokemon, and search for helpful items such as evolution stones.

The wait for Pokemon Sun and Moon’s Nov. 18 release date grows more brutal with each passing day. Excited for any of the new features? Let us know in the comments below.