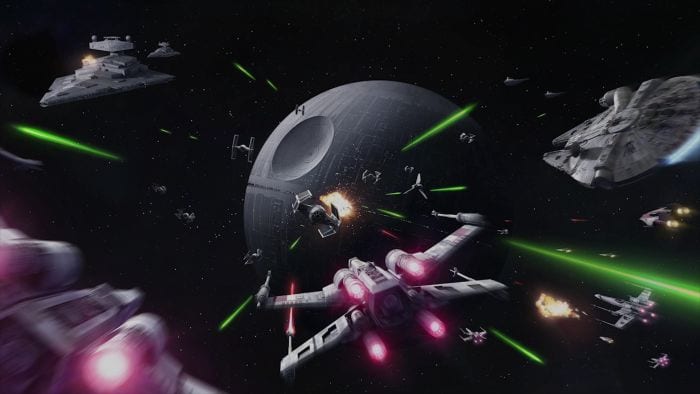 Star Wars Battlefront’s newest expansion pack, Death Star, is slated to launch next week for season pass owners, and EA has released a new gameplay trailer to show off what’s in it.

The trailer shows X-Wings swooshing about battling TIE fighters while Rebel and Imperial forces clash with each other indoors. There’s also R2-D2, adorably electrocuting a stormtrooper. Also shown off are the two new heroes included with the expansion: the bounty hunter Bossk and Star Wars’ most famous wookie, Chewbacca. Bossk can apparently see things in infra-red vision, while Chewbacca uses a boltcaster to take down enemies not already killed by his smell.

Star Wars Battlefront: Death Star includes five new maps set both on ground and in space. There will be a new game mode, titled “Battle Station”, which features 3 phases and is set on, in and all around the Death Star. You can fly about in Luke Skywalker’s Red Five X-Wing or Darth Vader’s TIE Advanced x1 starfighters, and wield a couple new blasters: the TL-50 Heavy Repeater and K-16 Bryar Pistol. Finally, there’s a couple new star cards: Medical Droid, which periodically provides healing and boosts the Star Card recharge rate, and Laser Trip Mine, which is an explosive with a scrambler in it.

Star Wars Battlefront: Death Star will be available to season pass owners on Tuesday, Sept. 20. It will be made available to everyone else two weeks later. Death Star is the penultimate expansion for the game, with the final one being a tie-in to Star Wars: Rogue One. Titled Star Wars Battlefront: Rogue One: Scarif, it will release some time around the film’s release, and will let you play as Jyn Erso and Director Krennic.