Sony recently announced the PS4 Pro and developers have since been voicing their support for the new hardware by announcing that their game’s will make use of the upgraded tech either through a patch or at launch.

Several high-profile games will make use of the PS4 Pro’s extra horse power including Uncharted 4, The Last of Us Remastered, and Horizon: Zero Dawn. However, it looks like CD Projekt RED does not intend to release a patch for The Witcher 3: Wild Hunt that will allow the game to make use of the Pro.

A user on Reddit named govind1262 asked CD Projekt RED via email whether or not The Witcher 3 will support the Pro and they received the following: 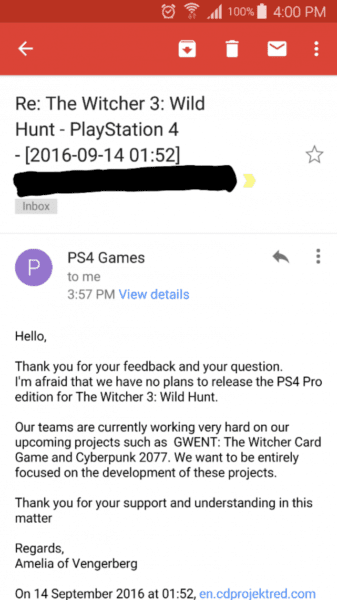 The Witcher 3 is one of the most successful games of all time and no doubt some fans will be a little disappointed that they won’t get to experience it via the Pro. However, it’s still a great looking game regardless.

Thanks to WCCF Tech for breaking the news.