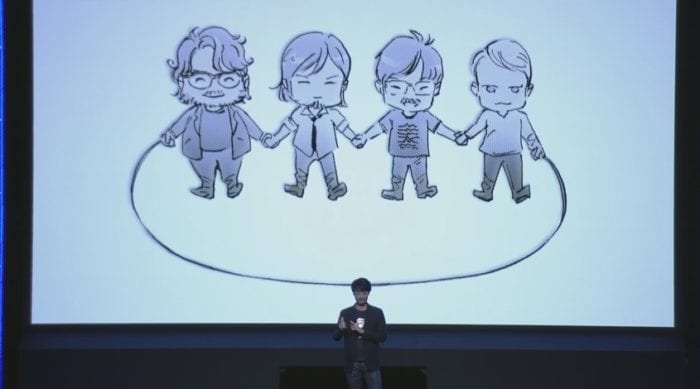 Hideo Kojima took the stage at PlayStation’s TGS Press Conference, and he brought friends with him.

The creator opened up his presentation with a brief talk on his new game, Death Stranding, and the founding inspirations behind it. Mass strandings, he said, occur when large numbers of whales and dolphins beach themselves on shore. If they’re dead, this is called death stranding.

But strands, he continues, also signify bonds. Bonds that tie people together. Like in this circle of friendship:

Here we see probably the true inside of Kojima’s mind. Four friends, bound by a single strand in eternal happiness. From left to right, the figures represent Guillermo del Toro, Norman Reedus, Hideo Kojima, and what seems to be Mads Mikkelsen.

Mikkelsen’s involvement with Death Stranding was first rumored back in August, when fans pieced together images suggesting his presence at a motion capture session. Knowing Kojima, his appearance in this image following those rumors is no coincidence.

For more on Kojima’s Death Stranding talk, check out Twinfinite’s TGS coverage over here. Looking for more news from the show? Check out the stories below!