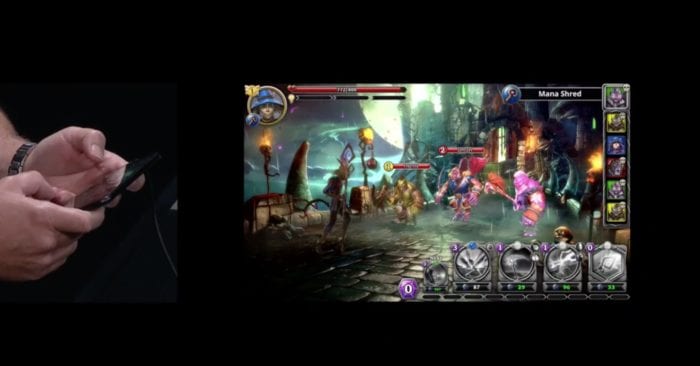 At their keynote event today, Apple unveiled the new iPhone 7 and iPhone 7 Plus, the company’s newest generation of smartphones. This model will be sporting the A10 Fusion chip, the “most powerful chip ever in a smartphone.”

The A10 is a 64-bit chip with a four-core CPU, two cores focused on efficiency and two focused on high performance. These chips make the iPhone 7 120x faster than the original iPhone, and provides a graphics chip 50% faster than the previous A9. This will allow “console-level gaming” on the iPhone 7, Apple said, enabling games never before possible.

The new abilities of the phone were demonstrated on-stage with Oz: Broken Kingdom. The game features real-time reflections, weather effects, and environmental destruction all made possible by the A10. The wide color display allows stronger visual effects, and the device’s new haptic feedback system makes players feel big hits. This combined with the new stereo audio creates a “visceral” connection with the gameplay. Oz: Broken Kingdom also demonstrated the ability to render over 400 flying monkeys at a “flawless, flawless framerate.”

This wasn’t gaming’s first appearance at the event. Apple, alongside Nintendo, also announced Super Mario Run, a mobile Mario game coming to the iPhone later this year. Pokemon GO will also be heading to the Apple Watch.

For more on Apple’s iPhone 7 and 7 Plus, check out everything revealed about the phones here.

Check out the stories below for more on Apple’s event: