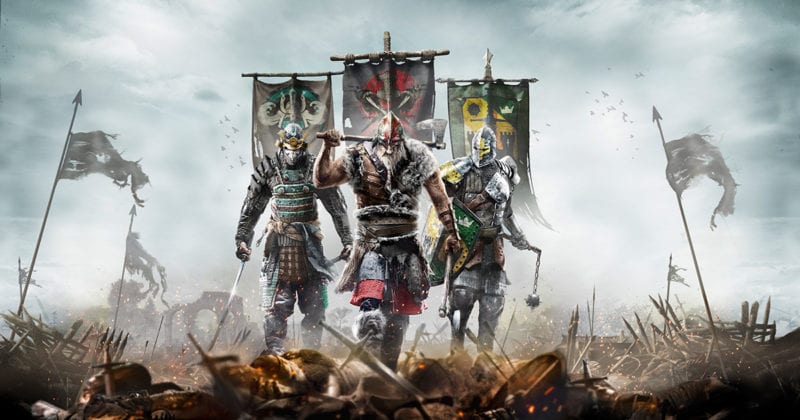 The For Honor Closed Alpha is set to launch later this week, and Ubisoft is pulling back the curtain just in time, letting a lucky few players know what they’re in for. With three game modes, three maps, and six playable characters, the For Honor alpha will run from Sept. 15-18.

Last week, Ubisoft revealed the first three characters included in the alpha, the Raider, Warden, and Kensei. Not satisfied at leaving the offerings at that however, the developer has now unveiled three more characters, each one “equipped with a unique set of skills, weapons, armor and fighting style as well as a wide library of customization options.”

First is the Orochi. A character in the Samurai army, the Orochi are masters of the katana. Blending agility and strength, they are “the finest warriors the world has ever known.”

Next is the Viking Berserker. “Wild, free, and utterly without fear,” the Berserker charges straight into battle with dual-wielded axes.

And finally, there is the Conqueror. Flail in hand, Conquerors are criminals conscripted into the Knight forces. These particular fighters, however, have proven themselves to be unstoppable on the battlefield.

All six characters will be fully customizable in the alpha, including the option to play as male or female.

The game modes on offer will allow players to go head-to-head in a 1v1 Duel, a 2v2 Brawl, or a 4v4 mode called Dominion. The maps then include the Samurai themed Overwatch, the Viking themed River Fort, and the Knight themed Citadel Gate.

“The Closed Alpha will also give players the first look at the progression system as they unlock new feats and weapons and gain rewards following their success on the battlefield,” Ubisoft announced in a post on the game’s website.

While invitations will be going out today, the developer reminds fans there will be plenty of chances down the road to get early access to the game. For those that can’t wait, a livestream is scheduled for tomorrow. Called the Revelation Stream, the event kicks off tomorrow, Wednesday Sept. 14, at 3pm ET on Ubisoft’s twitch channel. It will show off all the content coming to the For Honor Closed Alpha.

For Honor officially releases Feb. 14 for PS4, Xbox One, and PC.